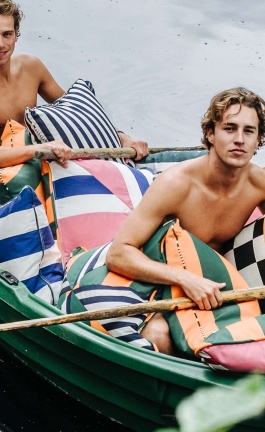 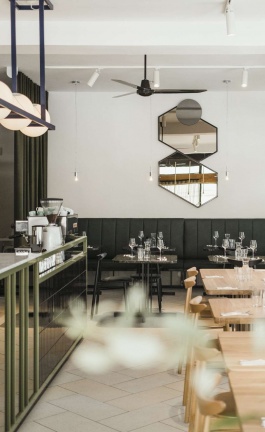 One of the things that caught our eye at this year’s Milan Design Week was “New Volumes”, the inaugural homeware collection by Australian stone and tile supplier Artedomus which was part of the Local Milan exhibition at 5 Vie district. Not only were we enthralled by the collection’s polished elegance, playful forms and exquisite craftsmanship, but we were also intrigued by the premise behind it: each collection is going to be based on a single natural material with the aim of pushing its boundaries. Powered by a distinct assembly of 8 stellar Australian designers, the New Volumes first collection explores Elba marble, a sumptuous bluish stone featuring cool grey tones and soft brown markings which was exclusively sourced from a quarry in northern Greece where the stone is richer in hue and texture than common varieties.

Elba is a very robust, resilient and durable stone that can be used for heavy-duty applications such as kitchen counters, floors, and even exterior cladding, but its sumptuous coolness and sculptural versatility means it also makes for beautiful objects. Taking advantage of its unique characteristics, the collection presents an eclectic range of larger and smaller pieces with different functions in a variety of forms, from elemental geometric solids to more organic shapes like ripples and volcanos. Although each designer has approached the material from a different perspective, all of the pieces in the collection share a purity of form and statuesque gracefulness.

Measuring 2.4 metres in length, Wyrie by Nick Rennie, a slender rectangular table top resting upon two softly angular bases, is the grandest piece in the collection which despite its size and considerable weight appears light and lanky. Smaller in size, Tom Skeehan’s Bacchus table makes as strong a statement, courtesy of its exaggerated proportions, curvaceous playfulness and a hollowed-out cavity that is both functional and whimsical.

Melbourne-based designer and New Volume creative director, Thomas Coward, took advantage of Elba’s strength and density to create Hurlysi, two cantilevered side tables carved from a single piece of stone that impress with their poised minimalism. Just as impressive is Lydn, a tray that Coward created in order to “capture a moment in time through the stylised form of an exaggerated ripple”. Representative of both sound and water, the polished ripple-like form conveys a sense of movement in an otherwise static material.

As evocative in their visual associations, Marsha Golemac’s Spomenik I and Spomenik II take their name from the modernist monuments built in the former Yugoslavia between 1960 and 1990 which she spotted in a book by Belgian photographer Jan Kempenaers. Golemac drew from the socialist utopian ideology that the monuments intended to represent in order to design two ziggurat-like pieces, part objet d’art, part bowl or vase, which beautifully marry form and function.

Dale Hardiman shares Golemac’s affinity for symmetry in his design of Semper, a cylindrical planter and vase, which both come with their own pedestal which in the case of the vase also doubles as a platter to collect fallen leaves and petals. Notwithstanding its practicality, the platter can be seen as a lyrical gesture that celebrates both life and death.

Completing the collection are Ross Gardam’s Brutalist desktop lamp, Sarah King’s curvaceous mortar and pestle (cheekily titled Napoleon & Josephine), Nick Rennie's crater-like fruitbowl, and Emma Elizabeth’s rough-hewn candle holders that reflect the designer’s intention to give the impression that “someone had literally hacked into the natural formation of the stone and created the piece themselves”.

Photographed at the quarry where the stone traces its origin, Artedomus couldn’t have found a more suitable location to showcase the collection’s ingrained nobility and elemental pureness. Depicted against the daunting excavated hillside, among humongous blocks of stone, piles of aggregate and excavation equipment, the photo shoot also highlights the extraordinary effort and craftsmanship required to transform an unwieldy chunk of Elba marble into a sculptural piece of design.