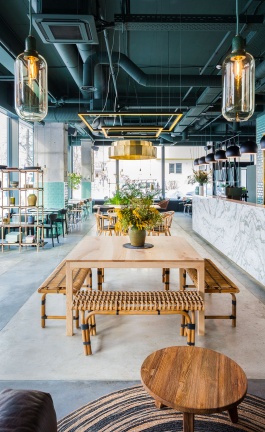 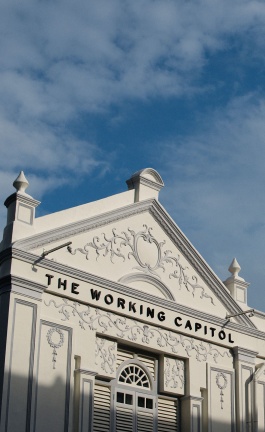 Creative Summit: The Working Capitol in Singapore by Takenouchi Webb

On the day of our meeting with world renowned architect, Mr. Nicos Valsamakis, we find him working in his studio - tucked behind a garden on the ground floor of a building on one of the hilly roads so characteristic of the Kolonaki district in Athens, Greece - his pencil, rulers and papers at hand. "I do things the traditional way," Mr. Valsamakis says, pointing out that he always has a mechanical pencil within reach. He is very kind and welcoming with an enthusiasm for his work that's palpable. As we talk in the book-laden conference room of his studio, he eagerly shares his love of architectural magazines with us - he has a mind-boggling number which he began collecting while still a student - and he pulls perfectly preserved past issues from the shelves, quickly pointing out some of his favorites. He has never sought attention for himself and, true to form, seems genuinely amused by our request to feature a tiny handful of his incredible designs on Yatzer!

Nicos Valsamakis was born in Athens, Greece and is rightfully considered to be not only the most important Greek architect of today, but also, one of the most distinguished the world over. It was in 1953, immediately following the completion of his studies at the Architecture School of the National Technical University of Athens, that he founded his studio; in the decades since, he hasn't stopped gifting the world with beautiful, thoughtful structures and receiving countless accolades for them, such as being the first architect from Greece to have been nominated for the coveted Mies Van der Rohe award in 1992. Despite his achievements, he’s quick to downplay the ingenuity his work that he has offered the world. "I design buildings," he says with a casual shrug, as if that is something that just anybody can do without much thought.

House in Koilada seems "native" to the property, never competing, but rather embracing the earth's natural terrain, ample sunlight and the incredible sea views surrounding it.

The buildings he designs are similarly low-key, their simplicity belying the hidden complexities in their designs. There is something very pure and minimal about each of the in excess of 300 buildings to his name, every one of which he has worked on from the first to the last line. It is thanks to this care that a recognizable, common design thread runs through the structures, allowing the public a visual recognition that something is indeed "a Valsamakis building."

One of the factors that distinguishes the style of his buildings, is the careful consideration that's been taken regarding each in relation to the property upon which it is situated. In essence, the land is the distinctive feature that determines the final result. A characteristic example of this is the House in Koilada, a stunning, private residence he completed in 2006, which is situated on a peninsula overlooking the Gulf of Argolida in Greece - photos of which we've published here. The structure seems "native" to the property, never competing, but rather embracing the earth's natural terrain, ample sunlight and the incredible sea views surrounding it.

As we look through the photos of buildings in his archives to choose the ones for this feature, we are treated to a true "show and tell" by the man himself, who pulls up a seat beside us to share various details about the buildings as their images pop up on the screen before us. For instance, we see how all the ceiling light fixtures of a private House in Filothei were incorporated within the building's construction while for the Daidalos Hotel on the island of Kos, Mr. Valsamakis designed an "ecosystem" of structures which hide the careful, clockwork-like behind-the-scenes proceedings required to run the large hotel from the blue sea perfection that the hotel's guests experience.

As he's previously publically stated and which he recounts for us, a strong inspiration in all his work has always been always the great love he has for his country, especially Greece's light and lifestyle. And looking at any of the buildings featured here - from the cliff-side House in Anavissos, to the window-walled Amalia Hotel in Delphi - is proof positive.

As mentioned above, we've published photos of only a very small handful of "Valsamakis buildings" here because our intention isn't to provide an encyclopedic account or retrospective of Mr. Valsamakis' works. Rather, it is to share with you the inspiration, enthusiasm and admiration that we feel when we look at these buildings.

There are many things that are designed and made in this world. But some seem to embody lives of their own and possess certain factors that, although they cannot be determined by numbers or adequately described with words, bring designs to life and, in turn, end up being the catalysts for new inspirations themselves…