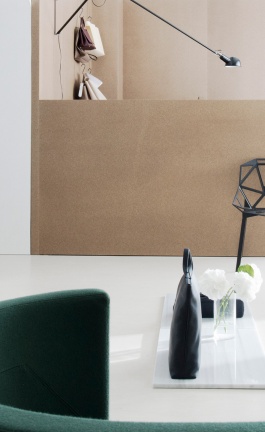 The New Tsatsas Atelier and Showroom in Frankfurt am Main, Germany 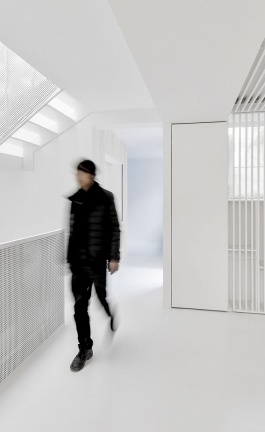 A new vegetarian bar in Ukraine’s capital brings healthy refreshments and energising food to city dwellers: designed by Artem Vahrin and Katya Zuieva of AKZ Architectura in collaboration with owner Yulia Savlepova, Orang+Utan Vegetarian Bar follows the concept that the city is a jungle, and its denizens “smart animals” that have developed sophisticated modes of feeding.

The bar’s small and elongated space was given a futuristic, laboratory-like feel —probably a nod to mid-century avant-garde design and particularly Superstudio’s work with grids and their Quaderna series (1970) for Zanotta. Although such a bleak and austere interior space is not what you would expect from a healthy-food establishment, the black-and-white ambience makes for an interesting contrast with the colourful food on offer. Though more of a takeaway snack bar, Orang+Utan also has a small seating area opposite the counter, over which hangs an impressive all-white neon sign. Meanwhile, the little jungle of plants in the lavatories further plays with the venue’s concept and adds a refreshing splash of colour to the whole project.