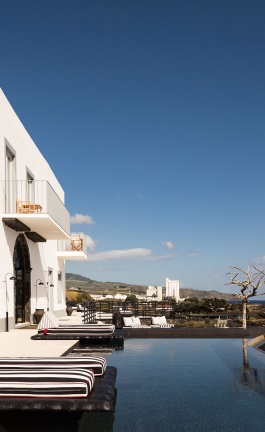 Traditional Chinese Architecture in Dialogue with Contemporary Design in the ...

Commissioned to transform a derelict, centuries-old dwelling into a tea house and restaurant, Chinese architects Outlooker Design saw an opportunity to redress the common belief that traditional Chinese architecture is dated, unsophisticated and ugly. In a rapidly urbanized, tech-centric society such as China’s, contemporary architecture has flourished, often side-lining traditional architecture in favour of technological innovation and modernist styles. With that being said, tradition continues to have a distinctive role, providing inspiration to contemporary architects and imbuing new developments with a sense of identity, evident in the refurbishment of this historical house located in the forested foothills of Longwu Mountain in Hangzhou. In embracing the building’s hui-style architecture, an ancient style resplendent in decorative carvings, the team meticulously restored its original features as well as introduced a series of contemporary elements inspired by China’s cultural heritage.

Originating in the historical Huizhou prefecture of Anhui where it takes its name from, Hui-style is one of the most distinctive types of traditional Chinese residential architecture. The origins of the style, which is characterised by highly decorative elements including wood, stone and ceramic carvings, is intertwined with the Huizhou merchants who prospered during the Ming and Qing Dynasties. Having amassed great fortunes through trading tea, salt, paper, ink, silk, cloth, wood, paint and pottery, they built luxurious houses, temples, gardens and memorial gates to showcase their wealth as well as their cultural prowess.

Designed according to Feng shui principles, Hui-style houses were usually located near forested mountains and rivers, and feature symmetrical layouts which centre around a central hall overlooking a patio with private quarters on either side. Combining a wooden frame construction with whitewashed walls made out of bricks, rock and soil, their most distinguishing characteristic is an abundance of decorative features, from elaborate patterns carved on structural beams and columns, to stone carvings, ceramic reliefs and ornamental screens. The style gradually spread as the merchants travelled across the country which may account for this house in Hangzhou – the original owner’s traces have since been lost.

Painstakingly restored, the building’s majestic timber frame, sloping roof and decorative carvings all attest to this architecture’s timeless elegance. Highlights include the massive roof beams, which are slightly arched in the middle and feature decorative patterns on both ends, beautifully hand-carved floral-themed corbels, and geometric latticed window screens. Taking advantage of the house’s layout, the team merged the central hall with the adjacent courtyard to create a semi-enclosed space where all such features can be appreciated in unison.

Far from conveying a staid, museum-like feel, the renovated house bears a sense of freshness and modernity thanks to a series of contemporary interventions. Inspired by the Lion Grove Garden, a UNESCO World Heritage Site in Suzhou famous for its labyrinthine grotto of taihu rocks, here, a minimalist rock garden dominating the courtyard and part of the central hall is centred on two monolithic service counters over which hangs a bespoke chandelier made of a cube and sphere attached to a popsicle stick-like plank. Surrounded by the majestic timber structure, the counters, chandelier and other similarly designed furniture pieces stand out in their geometric simplicity, rounded corners and white colour, with the garden’s wild vegetation, rocks and pebbles providing a buffer between ancient and modern elements. Floor-to-ceiling glazing enclosing the dining areas around the garden, including a modern extension opposite the central hall, allow the ancient structure and rock garden to be experienced from every table as well as blur the boundaries between indoors and outdoors. A plethora of bean bags allows visitors to admire the revamped building in comfort, while outside, a decked terrace designed for al fresco dining offers views of the surrounding mountains.

Reached by a white sculptural spiral staircase which echoes the design of the service counters and extension, a minimalist roof terrace offers meditative views of the surrounding countryside. On the same level, a private dining area and guest quarters round up the venue’s facilities. Subtly bridging past and present, the project is a masterclass in the renovation of ancient Chinese dwellings, inviting a younger generation to experience traditional architecture through a new lens.