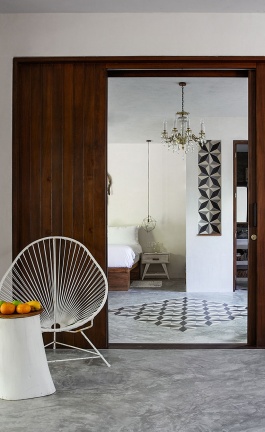 Sanará, a Holistic Retreat in Tulum, Mexico, by Studio Arquitectos

Bridging the world of art photography and floral design, OVERGROWTH is a new limited edition art publication showcasing a series of images capturing humans amidst elaborate botanical arrangements. Conceived and created by photographer Parker Fitzgerald and floral designer Riley Messina, the book is comprised of nearly 120 original pictures of haunting beauty, in a visualised dream sequence where the human body is complemented, enhanced or engulfed by nature.

"The project started as a way for Riley and myself to combine our talents," explains Fitzgerald. "We began by collaborating on a small group of pictures for a gallery show in Tokyo, but the more we shot, the more we felt like we had to keep going”. Two years later, their artistic collaboration has yielded a collection of photographs shot entirely on Kodak film in Portland, Oregon, featuring a large cast of their friends in shots ranging from intimate studio portraits to complex compositions showcasing laboriously made sets.

Some images, like the portraits with strategically placed flowers that both obscure and enhance the featured person’s characteristics, are minimal, while others use props, like mirrors and fabrics, for visual punch or take place in artificial landscapes of immaculate detailing reflecting a fairy tale-like atmosphere.  Then there are the photos of human bodies swimming underwater in what appears to be an enchanted pond filled with floating flowers: the resulting images, as if one of Matisse’s dancers had dived into one of Monet’s Water Lilies paintings, are mesmerising.

Quoting C. S. Lewis, the two collaborating artists eloquently describe the motivation behind their project: “We don’t want merely to see beauty... we want something else which can hardly be put into words —to be united with the beauty we see, to pass into it, to receive it into ourselves, to bathe in it, to become part of it.” In all, 2,000 limited copies of the publication have been available to purchase through the OVERGROWTH website.