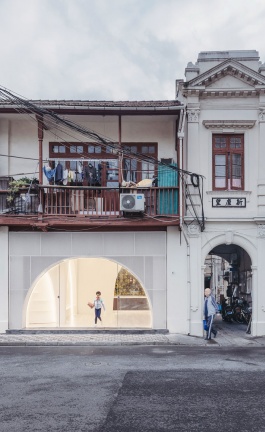 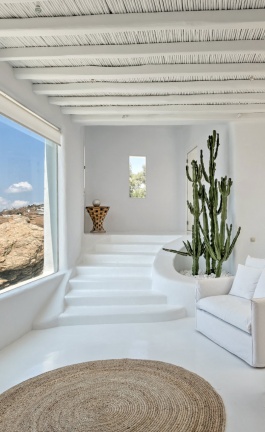 With its sophisticated elegance and timeless finesse, minimalism is more often than not the aesthetic philosophy of choice for contemporary architects designing private houses. Underpinned by the modernist principles of all-white, uncluttered interiors, asymmetrical compositions of geometric forms, functional simplicity and open plan layouts, modern villas are a paragon of minimalist design but they can also seem somewhat sterile and uniform. Enter Mexico City-based architectural studio Miguel Ángel Aragones, whose recent project Rombo IV, a wholeheartedly minimalist villa in the prestigious Mexico City neighbourhood of Bosques de las Lomas, breaks away from the modernist design mantra, lighting up the entire residence in an ambient deluge of neon colours after the sun goes down.

As its name suggests, Rombo IV is the fourth out of four separate buildings clustered in the same location. Occupying three floors, the spaces flow into one another with a variety of geometrical cut-outs facilitating wide sight lines and allowing for visual connections between rooms across all three levels, while bestowing a cubist sensibility. In fact, the creative use of orthogonal shapes and volumes in the guise of openings, cut-outs, parapets, pillars and in-built furniture, in combination with the all-white colour palette, has turned the house into a lived-in cubist sculpture.

The presence of several decorative stone spheres further enhances this sensation as does the inclusion of reflective surfaces like water ponds and mirror-polished finishes. The use of such reflective elements is a key element of the architect’s design allowing the planted areas in the perimeter of the plot to visually penetrate deep into the house’s interior, as well as imbue the rooms with a sense of tranquillity and promote contemplation.

On the ground floor, the communal spaces coalesce around on an open-plan hub dominated by a reflective “catwalk” that appears like a shallow pond. The space opens up through a double-height sunroom to a triangular courtyard which is hemmed in by a strip of rich vegetation and a linear pond that echoes the “catwalk” inside.

The bedrooms are located on the first floor with the master bedroom jutting out over the triangular courtyard, while the other two bedrooms open up onto a terrace overlooking a triangular pond sitting on top of the garage.

On the top floor, a rooftop pool is sheltered on all sides for privacy and shading while a series of slim cut-outs allows glimpses of surrounding vegetation and the discrete interplay of sunlight and shadows throughout the day.

At night, the all-white interiors are transformed into a three-dimensional canvas of neon colours that harmoniously blend into each other. Bright blue, orange, purple, pink and red hues illuminate the rooms that cast a prismatic glow out of the windows. The shifting colour combinations that wash over the architecture bring to mind artists such as James Turrell and Dan Flavin whose seminal exploration of space and light never ceases to amaze. Like those artists’ work, the introduction of coloured lights invites the occupants to experience the spaces anew, to recalibrate the physical presence of their surroundings. The colour scenarios also allow the ambience of the rooms to tune in to the occupants’ mood: soothing or energizing, cool or warm, discrete or flamboyant. Minimalist design hasn’t looked so viscerally satisfying in ages.