Monsieur Bleu At The Palais de Tokyo In Paris, France 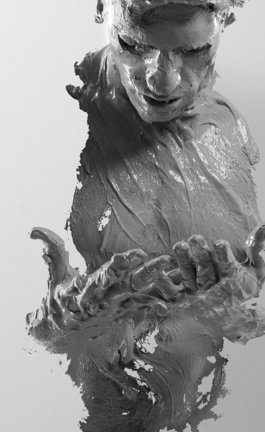 Couple Under An Umbrella

Dressed in a plain, navy one-piece swimming suit, a short-haired elderly woman is sitting beneath a colour-blocked sun umbrella, affectionately contemplating her male companion whose head rests peacefully on her thigh. Frozen in time and shaded from the sun, the anonymous pair could easily be enjoying a leisurely day on the beach but instead, their pale, motionless bodies rest atop the concrete floor of the Jean Nouvel-designed pavilion at the  Fondation Cartier pour l’art contemporain in Paris, France.

Simply titled ''Couple Under An Umbrella'', the striking piece is one of the three new, previously unseen, sculptures currently on view at a solo show surveying recent works by the acclaimed Australian artist Ron Mueck. The exhibition, which will be on view until the end of October 2013, is the first major European show since 2005 dedicated to this UK-based artist known for his large-scale, hyperrealist sculptures. Be it a casually-dressed young couple caught in a pensive moment, a weary-looking mother carrying bagfuls of groceries with her baby strapped to her chest, or a nude, middle-aged woman arching backwards under the weight of the twigs she bears, Mueck’s painstakingly-detailed sculptures appear both ordinary and anything but, which leaves them so very open to interpretation. Eerie and otherworldly, the giant figures seem to be engrossed in their activities, reticent and unaware of visitors’ peering eyes.