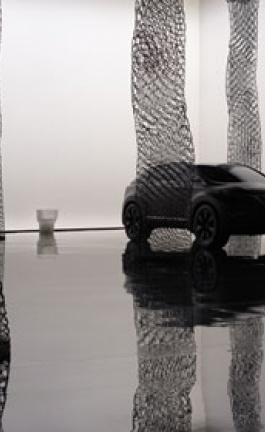 Lexus on the Milan design week

Milan, Italy - Swarovski, the world’s leading manufacturer of precision cut crystal unveiled a dramatic new
concept at the Swarovski Crystal Palace exhibition at Via Savona 56, Zona Tortona, Milan. Swarovski invited world leading designers to conceive an atmosphere experimenting with the unique medium of crystal. The challenge - to push the boundaries of crystal and create contemporary interpretations of lighting, furniture and design. Their inspirations are derived from varied sources including the natural world, the visual arts and high technology. The results are dramatic, captivating, and give new meaning to lighting and design. Swarovski Crystal Palace is proud to present a provocative exhibition for 2008 featuring installations by:

VEIL by PAUL COCKSEDGE ‘Veil’ by Paul Cocksedge Studio is a four metre high curtain made of 1,440 Swarovski crystals. It creates an incredible visual illusion; when viewed through a mirror, the shimmering curtain reveals its hidden secret: an iconic image set within the canvas of crystals, and when the viewer looks back at the curtain, the image disappears. Cocksedge sees this first edition of ‘Veil’ for Swarovski Crystal Palace as a romantic illusion. PAUL COCKSEDGE A rising star of lighting design, the young British designer Paul Cocksedge creates visually spectacular and technically ingenious lights that celebrate the magical and transformative qualities of illumination RANDOMLY CRYSTALLINE by FRONT Front Design experimented with Swarovski crystal and hand blown glass to create a series of visually innovative vases and lights, of which no two are the same. FRONT DESIGN Swedish design group Front consists of four designers; Sofia Lagerkvist, Charlotte von der Lancken, Anna Lindgren and Katja Savstrom. They take their inspiration from animals, physics, surroundings, and materials.RÉ by ZAHA HADID Zaha Hadid’s design pushes the boundaries and preconceived notions of the chandelier, redefining the nature of the object. “From my first days in architecture at the Architectural Association, I have always been interested in the concept of fragmentation. For me the idea of fragmentation has also to do with the idea of dynamism, of a cosmic explosion of some kind. For this piece, each Swarovski crystal can be considered as an individual element that interrelates with, and responds to, every other crystal. Locked in a spiralling vortex, the crystals direction is determined by the forces of an explosion. As with our architecture, contextual embedding is always considered. The chandelier relates to - and interacts with - each new environment in a unique manner; constantly reinventing itself and offering exciting new possibilities with each installation.” ZAHA HADID Zaha Hadid is a notable British Iraqi deconstructivist architect. In 2004, Hadid became the first female recipient of the Pritzker Architecture Prize.GLOBE by STUDIO JOB Studio Job has created a 175cm diameter spinning globe applying 500,000 Swarovski crystals. “Maybe it’s the sense of time and gravity that touches us, maybe it is the earth that keeps turning and turning.” STUDIO JOB Graduates of the renowned Design Academy Eindhoven in the Netherlands, Job Smeets and Nynke Tynagel form Studio Job. From the beginning, their collaboration resulted in highly expressive, usually one-off or limited-edition artesian works.CUPOLA by PIERO LISSONI Piero Lissoni’s chandelier explores the illusion of depth with light and crystal - creating an impactful architectural sphere. PIERO LISSONI Celebrated Italian architect, Piero Lissoni, works in all design disciplines from graphics and industrial design to architecture and interior projects. He cultivates the art of understatement.ELLIPSIS & FRAGMENTS by ARNE QUINZE Belgian designer, Arne Quinze, created “Ellipsis” a sculptural light, as well as Fragments, a space dividing sculpture that fuses the effects of material, colour and light. Staged together, they create a landscape of sculptural forms. ARNE QUINZE Arne Quinze is self taught. He now produces over 15,000 pieces annually at his studio in Belgium. CAVERN COLLECTION by FREDRIKSON STALLARD Transcending convention, Fredrikson Stallard has created a collection of solid monolithic furniture forms in three different materials – concrete, wood and leather. Perforated by cavernous openings, the interior surfaces are encrusted with thousands of Swarovski crystals and lit from within to add volume and density to the sculptures. FREDRIKSON STALLARD Patrik Fredrikson and Ian Stallard began their collaboration in 1995 and have since become internationally recognised as leading exponents of British Avant-Garde Design.

DOUBLE SOLO by MARCUS TREMONTO Adding to his infamous and groundbreaking artistic interpretation, Marcus Tremento adds crystals to electro luminescent wire where he aims to mould the crystal like clay rather than restricting it to being a mere accent to the light source.
MARCUS TREMONTO Marcus Tremonto began his career as an artist and successfully exhibited his work in galleries, but his fascination and enjoyment of the future soon directed him to new mediums.

AQUA JEWELS by MARCEL WANDERS
Bisazza, the famous tile manufacturer teamed up with Swarovski to create a mosaic wall designed by Marcel Wanders. The wall is encrusted with specially designed Swarovski crystal tiles. This mosaic wall is the backdrop wall for a shower room which contains three Shower Chandeliers.
MARCEL WANDERS Marcel Wanders grew up in Boxtel, the Netherlands, and graduated from the School of the Arts Arnhem in 1988. Marcel Wanders’ fame started with his iconic Knotted Chair, which he
produced for Droog Design in 1996.

ETERNAL by TOKUJIN YOSHIOKA
“Eternal” is a series of acrylic blocks each containing a giant Swarovski Crystal demonstrating the juxtaposition of clear acrylic and clear Swarovski crystal. The installation presents “Eternal” as a floating star. The Eternal series is a limited edition of 41 pieces, representative of Yoshioka’s age.
TOKUJIN YOSHIOKA Tokujin Yoshioka established Tokujin Yoshioka Design in 2000. He has completed many projects collaborating with Issey Miyake for almost 20 years and has received critical acclaim from all over
the world.