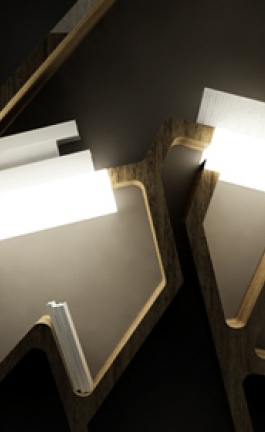 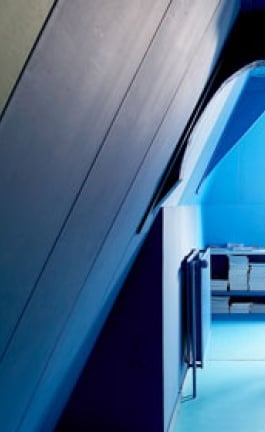 Yatzer has finally received the e-mail with unique details about talented Mr.Ante Vojnovic's work, thanks to Mr.Mao Sakaguchi from H.P.FRANCE, Inc.

Although I have requested them earlier, they arrived today...So I would like to apologise for posting this beautiful work and this exhibition 3 days before its end.

"MY NAME IS ANTE VOJNOVIC"
I AM BUSY CONTEMPLETING THE INEXISTANT. I FOUND THROUGH CREATIVITY A WAY OF LIFE, INVENTING A FAR AWAY WORLD, I KEEP MY DISTANCES, DON’T WANT TO FALL IN THE NORM. I WANT THAT FAR AWAY WORLD STRIPPED FROM PRECONCEIVED IDEAS OF THE FUTURE OR CAREER AND WITHOUT CLEAR OUTCOMING, TO BE GUIDED BY ONE AND ONLY PATH; MINE, NO SIDES TAKEN, NO CAUSE TO DEFEND BUT JUST FEEL THE MOMENT.
MESMORIZED BY THE EXCESS, THE NONSENSE AND THE MADNESS, THE NEUTRAL BORES ME. ALWAYS ABOVE THE LITTLE WORRIES, I LOVE TO FIGHT THE PRINCIPLES, PULLING MYSELF OUT OF THE WORLD, CONTEMPLETING THE CENTURY FARWAY FROM THE RUMOURS, FLIRTING WITH THE UNIVERSAL BY DEVOTING MYSELF TO THE ANECDOTALISM WITH A COATING OF BEAUTY.
I REALIZE THAT I AM A MYSTIC, CULTIVATING THE NOTHINGNESS, THE NEED FOR LONELINESS IS THE RISK OF MISANTHROPY. I DISCOVERED HOW A LONELY MAN IS IN GOOD COMPANY.
TO BE AN ARTIST JUST LIKE THE TOXICOMAN IS TO LIVE WITH WITHDRAWALS THAT CAN ONLY BE OVERCOME BY THE SUCCESS.
WHEN I AM ABOUT TO CREATE A PIECE, I DO NOT APPROACH IT WITH AN ANALYTICAL WAY BUT RATHER WITH INTUITIVE ONE.WHEN SOMETHING COMES TO ME AND I FEEL MOVED BY IT, I JUST TRUST MY FEELINGS, I BELIEVE THAT ART COMES FROM SELF CONFIDENCE AND ALSO FROM ONE’S IDEAS, WHICH PUTS THEM TO A METAPHYSICAL LEVEL, SIMPLY PUT; I DON’T DO MUCH, DON’T FORCE ANYTHING JUST KEEP MY EYES OPEN STARING AT THE WORLD AND TRY TO BE CONNECTED, ALL IS USEABLE , CHAIRS, TABLES HAVE AN ATTRACTIVE APPEAL TO ME AS FAR AS I CAN RECALL, I IMAGINE THEM SCULPTURAL, NON FUNCTIONAL ,ETC… AND ONE MORNING YOU GO DOWN TO THE ATELIER AND START CREATING.

Aosando Art Fair just finished its second time event, it is a contemporary art festival which is held along a quiet back street of Shibuya and Aoyama district. ANTE VJONOVIC's new work [TANGO VARIATIONS] is displayed until 11th of November at the CH Building B1F.

On Monday, 16th of June, as usual I walked in the atelier with Ante’s favorite hot canned coffee. Perched on a 40 cm table placed in the center of the well-organized space, Ante was smoking a cigarette.
“Bonjour!” I said.  Ante, silent, answered rapidly with his eyes and then moved them towards a worktable situated on the west side of the atelier. Lying there, in the middle of the patterns left by cigarette burns on the wood, was the strange shaped objects reflecting the soft morning light, all placed in a row.  I took a step closer and realized that the objects looked like a chair, but strangely they were all transformed and placed in a weird way. Truthfully my first guess was Insects rather than Chairs. I looked at Ante as my hand was moving towards the object asking him if it was alright for me to do so. I received a blow of smoke with a little nod as an answer; his way of saying that it was OK. Delicately I picked it up and brought it near my sight and took a minute to examine it. I could not help smiling through the process; maybe because of Ante’s funny body movement, fidgeting like a silly guy but also because I could tell that he must have had put so much work and efforts on this piece but was acting as if it was nothing. I put the object down and stared at Ante. He threw the cigarette butt on the floor and said: “What do you think?
And that is when the all project started :

There are no Sketches in Ante’s world. He lies when he says that he does not know how to draw just because he hasn’t learned how to… (although occasionally he draws a few sketches). He rather gets “his hands dirty” and materializes his ideas by creating miniatures as “drafts” in wood and resin. The benefit of this process is that it gives a clear an instant clue on the operational problems. The “draft” is then photographed and uploaded on a computer. The disadvantage is the time consuming of the whole process unlike sketch which is quick and can be altered easily as you wish.
There were eight miniatures of dancing chairs; with distorted legs. It looks like a mollusk almost touching the floor. The overall piece is delicate as usual.
So what kind of material will he be using for the final piece? After all it is a quite complex one with curves and twists…. A challenge. Ante quietly says: “It doesn’t matter the material that I will use. It can be made out of metal, plastic, rubber…
Back to the process, the miniatures are photographed. The four wooden boards are painted in flat white color with a roller and quickly dried with a special heater…Ante is a man of little patience when it comes to Art. Then the boards were applied to the worktable, fastened together with screws. In a heart bit we were looking at a miniature studio with white flooring surrounded by three white walls. Placing the digital camera we started to take shoots until we got the object covered with a 360º by rotating in order the miniature and uploaded on the computer for screening.

I opened the folder while Ante was cleaning his glasses with the bottom of his white Tee-shirt. After adjusting them on his nose he took a good look at the screen. A minute later Ante grabbed again his glasses and once more decides to give them another cleaning touch and says: “Is it my eyes or the glasses that are blurred?
Indeed the miniature on the picture was blurred since the camera had focused primarily on the white wall.
New image, then another one, and next….next…next…Not bad….next…next dance the photos on the screen, Ante asked me to open them faster. Next, next, next……knock, knock, knock goes the fingers of Ante to give a rhythm. All of a sudden he grabs a pen and a piece of paper and the word TANGO appears and decides to return to his atelier with a feeling of satisfaction.