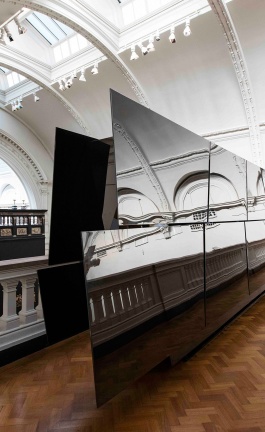 Taking its name from its previous incarnation as a drafting equipment shop, Tehnikum bistro in Moscow offers casual, albeit gastronomic dining, in an environment that hints of both the building’s and the city’s past. The designers, Olga Treyvas and Vera Odyn of Russian architecture studio FORM, have opted for a retro aesthetic that combines design elements from the Soviet era with mid-century modernism while also deriving inspiration from the space’s previous occupants with regards to furniture and lighting details.

Undoubtedly, the bistro’s centerpiece is the fresco by local artist Dmitry Aske, which alludes to epic mosaics or murals often featured in otherwise bland Soviet canteens while at the same time — courtesy of Aske’s background in graffiti and graphic design—having a contemporary, pop sensibility. Referencing once again, all things from Russia’s Soviet past, the custom designed chandelier, which circles the load-bearing pier in the center of the space, pays tribute to the Moscow metro light fixtures from the 60s and 70s. Tan leather sofas and wall wood paneling on the other hand exude a minimal elegance of mid-century design, as do the Le Corbusier and Gras drafting lamps that are also a salute to the building’s past as a drafting tools emporium, while the open kitchen at the back, with its long service counter and bar-stools, brings to mind American diners. This plethora of design references is perfectly balanced by exposing the building’s original layers, brick walls and untreated ceilings as well as visible ventilation ducts, which cleverly anchors the historical context onto the building’s history.

The newly opened restaurant was conceived by restaurateur Boris Zarkov, Chef Vladimir Mukhin and gastronaut Mikhail Druyan of Russian restaurant holding White Rabbit Family as a more affordable place to serve their culinary ideas. Located in Moscow’s theatre district, making it ideal for a quick bite before or a more leisurely feast post-spectacle, it boasts an eclectic yet concise menu offering shrimp tempura and trout ceviche to grilled pastrami and truffle sausage, as well as bistro classics like flat iron steak and smoked beef ribs. With a comprehensive wine list of mostly European wines and a stellar selection of cocktails to boot—plus a special “night menu” served from midnight to 2am on Fridays and Saturdays—all patrons have to do is sit comfortably and enjoy Tehnikum's vibrant atmosphere of timeless elegance.

The designers have opted for a retro aesthetic that combines design elements from the Soviet era with mid-century modernism.

Undoubtedly, the bistro’s centerpiece is the fresco by local artist Dmitry Aske, which alludes to epic mosaics or murals often featured in otherwise bland Soviet canteens.