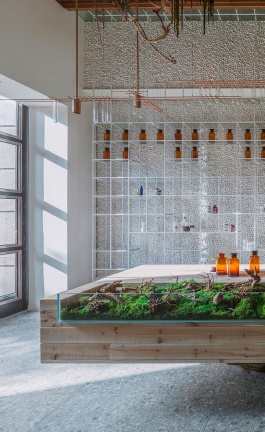 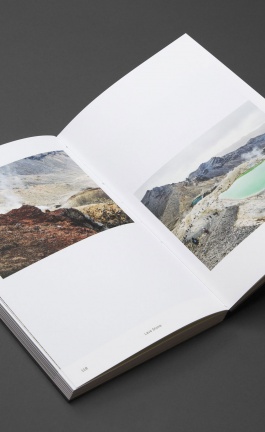 The barbershop/cocktail bar, The Fitz, in Odessa, Ukraine, is as unique as its dual purpose concept. Designed by Denis Belenko Design Band, the venue opened in March of 2016 and immediately gained a cult following among guests and residents of the city alike. It might seem difficult to grasp how the two formats can co-exist in one space - and, at first glance, the décor elements do lean toward being more a high-concept, modern bar than a grooming spot - but the designers' organic design easily seems to meld the two.

Upon entering, the dark and weathered color scheme gives The Fitz a decadently cavernous feeling. The deep blue and brown multi-layered walls and ceiling have been treated to appear as if the last time they were painted was sometime in the middle of the previous century. The leather furniture, such as the tufted, banquet seating and the deep armchairs, also appears to have been rescued from a decaying building that was once a grand, old home.

Such is also the case for the other pieces throughout; from the mirrored finish of the églomisé table tops, to the heavy velvet curtains framing both the high windows as well as the arched passageways leading from one section of the space to the next. The one piece that ties it all together is the long contact bar in the main hall: Its heavy, dark carved wood has also been treated to appear time worn while the "weight" of its design amplifies the mood scheme. Above it hangs a piece that cannot be missed: an enormous crystal chandelier dripping languidly down from the ceiling, glamorously illuminating the proceedings below.

The old-fashioned barbershop nook, complete with a candy stripe delineating it, is ingeniously integrated into the bar afterhours when the barbers have finished their work. We imagine many a gentleman booking their appointment near closing time so they can easily slip into the bar, groomed, polished and ready for the night ahead.