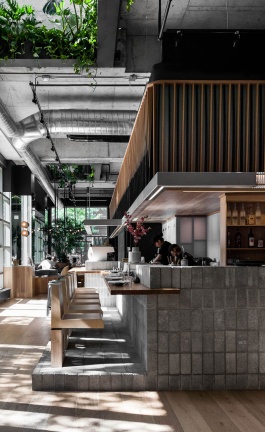 In their 1972 book “Learning from Las Vegas”, architects Robert Venturi and Denise Scott Brown famously distinguished between two types of buildings, “ducks”, buildings whose form embodies their function, and “decorated sheds”, those whose external shell is autonomous of the activities inside. The Imprint, a two-building entertainment complex at Seoul’s Paradise City by Rotterdam-based architecture practice MVRDV, remarkably succeeds in straddling both categories. Both modernist in their functional simplicity and postmodernist in their whimsical swagger, the two new buildings not only defy architectural categorization but also blur the distinction between architecture and art.

The Imprint is the latest addition to Paradise City, an entertainment and hotel complex comprised of 6 buildings located a kilometre away from Incheon, South Korea’s largest airport, and consists of a nightclub and an indoor theme park. The two buildings required no windows but they nevertheless had to connect with their surroundings. MVRDV’s ingenious solution was to design two simple volumes onto which they projected the facades of the neighbouring buildings, "imprinting" them in the form of relief patterns.

MVRD’s design adheres to the modernist principles as embodies by a typical glass tower: simple in form, the two buildings reflect their surroundings which “ensures coherence”, as principal and co-founder of MVRD Winy Maas says, adding that “Paradise City is not a collection of individual objects such as Las Vegas, but a real city.” At the same time, the architects have also espoused the postmodernist mantra of treating the façades as an autonomous element, “draped” as they appear to be over the two building volumes. The marriage of modernism and postmodernism is what ultimately makes The Imprint a marvel of contradictions: plain yet striking, stark yet whimsical, contained yet unfolding.

The facades of the two buildings are in fact made up of 3,869 unique panels, created out of glass-fibre reinforced concrete, whose construction required moulds to be individually produced using MVRDV’s 3D modelling files. Once installed, the panels were painted white in order to emphasize the reliefs, thereby transforming the two buildings into sculptural volumes of abstract art.

But the most dramatic architectural gesture of all is undoubtedly the “lifted” entrances. Here, the buildings seem to literally lift up their skin like a curtain to reveal mirrored ceilings and glass media floors that zanily throb in kaleidoscopic colourfulness, luring visitors inside with a seductive taste of what is in store for them. In the morning, “after the nightly escapades”, Maas says, “a Zen-like silence follows during the day, providing an almost literally reflective situation for the after parties. Giorgio de Chirico would have liked to paint it, I think."

To say that The Imprint was created to make a splash would be an understatement: it has actually been designed to be visible to passengers landing  at Incheon Airport, courtesy of an immense, dazzling golden spot covering one corner of the nightclub building. Seen from above, the sun-like spot acts as a kind of welcome to South Korea. In order to further accentuate this attention-grabbing feature, when the rest of the facades are softly lit from below at night, the gilded spot is brightly illuminated from above, making it just one more example of MVRDV’s confounding design that succeeds, as Maas says, to surprise and seduce as well as soothe.