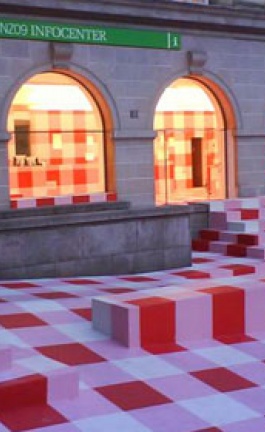 Paradise Row proudly presents the first solo show of Jean Charles de Castelbajac. Throughout his ground breaking career as a fashion designer, Castelbajac has employed a strategy of ‘cultural hijacking’ - the appropriation, recycling and synthesis of images, signs, symbols and styles from both popular culture and high art to create still newer designs and visions. In keeping with his openness to the ever-shifting world of contemporary visual culture, Castelbajac has collaborated with artists including Keith Haring, Jean-Michel Basquiat, Andy Warhol, Bettina Rheims and Loulou Picasso.

In Triumph of the Sign, Castelbajac presents a series of paintings that articulate his fascination with, broadly, the tensions and synergies between high art and consumer culture, and most specifically that defining element of contemporary visual culture – the brand logo. In a process that mirrors the production of mass-consumer goods, Castelbajac commissioned painters in China to perfectly reproduce a series of Western masterpieces, from Bronzino to Manet, and another group to paint logos on the surfaces of the copied masterpieces. The resulting works ironically embrace a flattening of hierarchies, a breakdown of distinctions and an evacuation of content.

The works, therefore, are themselves perfect signs of the present moment

“The bastard form of mass culture is humiliated repetition...

“Constant revolutionizing of production, uninterrupted disturbance of all social conditions, everlasting uncertainty and agitation distinguish the bourgeois epoch from all earlier ones. All fixed, fast frozen relations, with their train of ancient and venerable prejudices and opinions, are swept away, all new-formed ones become antiquated before they can ossify. All that is solid melts into air, all that is holy is profaned, and man is at last compelled to face with sober senses his real condition of life and his relations with his kind.” Karl Marx, The Communist Manifesto