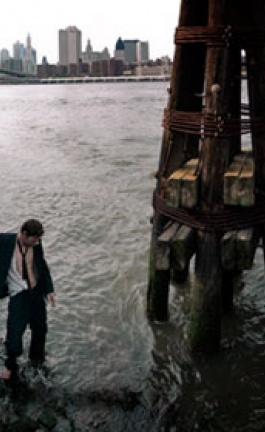 The Cinemascapes of Aaron Hobson

Cool Young Designers and The Sexy furniture of Arik Levy

Rural and remote locations with profuse green spaces, which work as refuges in a highly populated city like London are hosting some magical artistic installations. Spontaneous City In The Tree Of Heaven is one of these sculptural installations commissioned by Up Projects and created by London based artistic duo Jo Joelson and Bruce Gilchrist, known as London Fieldworks.

Several Hundred bespoke bird boxes are carefully placed on two Ailanthus Altissima trees, also known as the tree of heaven and “aim to provide both a sculptural work to be enjoyed by the public and an architecture that would be accessible to the birds,” the artists explain.   Spanning from Duncan Terrace Gardens in the East side of London to Cremorne Gardens in the west, Spontaneous City expanded on themes from an earlier London Fieldworks project “Super Kingdom” a series of animal show homes modeled on the imperious architecture of despots' palaces (Mussolini, Stalin and CeauÅescu) and commissioned by Stour Valley Arts for King's Wood in Kent the artists explain. “However the urban location of the Spontaneous City project drew on the local architecture surrounding the parks and the ecology and biodiversity of the area that offered great potential as a contemporary narrative,” they say.

Georgian townhouse architecture is evident in Duncan Terrace Gardens in Islington and “as an exception to this, towards the south end of the gardens on Colebrook Row is a block of 60’s social housing flats, an enclave of modernity in stark contrast to the traditional architecture of the townhouse,“ they say. According to the artists, this provided a tension both architecturally and demographically. “This tension reminded us of the gated communities and fortified developments butted up against to shanty and slum housing that we saw in the cities of Bangalore, India and Sao Paul in Brazil.”

The presence of an Ailanthus Altissima or tree of heaven, in the centre of the narrow garden sandwiched between Duncan Terrace and Colebrook Row further heightened the local context as they both stress. They later found another tree of heaven in the Oremorne Gardens and used the species as a way of linking both locations. Jo Joelson and Bruce Gilchrist also explain that the name of the tree within the project’s title could have some kind of utopian pretensions. “But as an added layer of biodiversity speak, there's irony in the title of "Spontaneous City in the Tree of Heaven".''

Functioning as an allegory of population crash and dwindling biodiversity Spontaneous City, “could also be interpreted as a metaphor for voidance,” the duo explain.

“The Ailanthus altissima is a deciduous tree native to both northeast and central China and Taiwan, and is a tree species of much botanical interest in London, and elsewhere in England generally. Essentially, there is concern that this ornamental turn invasive species is poised to dramatically increase in numbers. It's one of the fastest growing trees around, it's allelopathic (meaning it produces a biochemical that inhibits the growth of other plants within its vicinity), and its seed production capabilities are prodigious”.

London Fieldworks is a collaborative partnership between artists Bruce Gilchrist and Jo Joelson. Bruce studied at Canterbury School of Art and Jo at Croydon College of Art.  London Fieldworks practice is typically inter-disciplinary, collaborative and socially engaged, working across installation, sculpture, architecture, film and animation. Projects have explored the authenticity of mediated experience and experience of place; the creation of alternative narratives drawn from the histories of place, society and culture; and the poetic applications of technology. These ideas are seminal to the artists’ notion of ecology as a complex inter-working of social, natural, and technological worlds. Imaginatively sited projects in urban and rural settings have been inspired by research undertaken in remote sites in Brazil, North East Greenland, Northern Norway, Scottish Highlands and the USA.