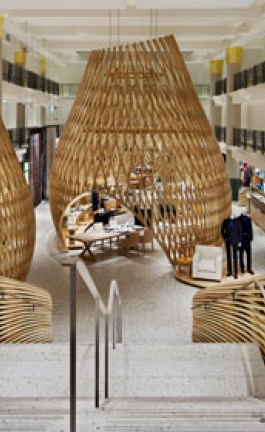 An elegant dive into Hermès Rive Gauche by RDAI

Celebrated Greek choreographer Konstantinos Rigos has been long experimenting with Pyotr Ilyich Tchaikovsky, trying to interpret in his trademark way his ballets. The love affair begun in 1999 with Sleeping Beauty and it continued in 2002 with Swan Lake/The memory of the swans, both with the National Theatre of Northern Greece. This time is the turn of Nutcracker, Tchaikovsky’s 19th-century two-act ballet, in collaboration with Oktana Dance Theater.

The Nutcracker is a so called Christmas classic, reflecting not only winter time and the way it is associated with Christmas but also the illusions and expectations that are more vivid than ever this period. The adaptation of Konstantinos Rigos is a quest to portray the unfulfilled, the imaginary, inspired by love and the way it turns sometimes to be a (seeming) lie. Floating between reality and fantasy, between innocence and violence, between a pleasant dream and a nightmare, Rigos’ take on the Nutcracker is definitely a trilling experience.

Sometimes funny and sensual, sometimes disturbing, it never leaves you indifferent. What can we say about the beautiful execution of the choreography, the immense capacity of the male dancers to alter their roles- from vivid toys to animals and back to humans- and the unifying influence of Clara, the only female character of the performance? It may be indeed the male dancers that capture the attention but Clara, a small girl that becomes an adult, with her desires turned into nightmares and what seemed initially funny turned into something darker and sinister, is the key factor of the story.

Clara projects her dreams and desires to the Nutcracker, but in the end they are revealed to be only made by wood. Dance under these circumstances seems the only way to release the pressure and to highlight life, like the pulse of the heart that remains vivid while one is sleeping. A definite must see, the Nutcracker is a mature act made with the material of the dreams.

Don’t say you haven’t been warned!