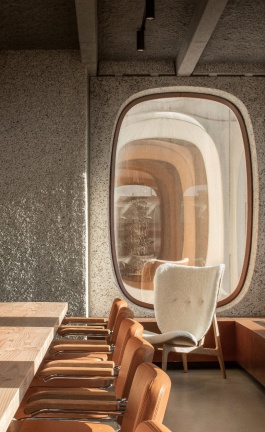 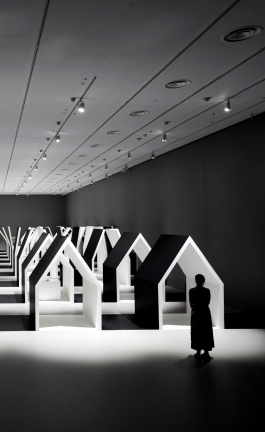 One of the transformative powers of art is to elevate the humble into the sublime, be that a vase of sunflowers that gains immortality as a painting, a piece of marble reborn as a regal bust, or in the case of American artist Amber Cowan, discarded glass that finds a second life as seductive artworks. Sourced from now defunct 20th century American glass factories, piles of scraps left over from production runs of fruit bowls, cake plates, decanters and other glassware, are laboriously transformed through a painstaking process of flame working, blowing, and hot-sculpting into abstract sculptures of intricate detailing. Sporting exquisite floral motifs rendered in lush colours such as chocolate, a popular colour in the late 1800’s, Burmese green, shell pink, sky blue and milk white, Cowan’s surreal sculptures are populated by tchotchkes and figurines that the artist finds in thrift stores, flea markets and junkyards. Inspired by the porcelain-like glass sculptures of 18th century Nevers in France, Cowan’s work explores the relationship between tradition and the avant-garde as well as paying homage to the past glory of US glass manufacturing. Yatzer recently chatted with Cowan about her artistic practice, her floral motifs and her fascination with glass.

What was the impetus to becoming an artist? Where did your fascination with glassware originate from?

I had always been interested in 3-D materials as a child. My high school had an unusually high number of ceramics wheels and also taught us stained glass techniques in art classes. I was always attracted to glass though, and remember even buying my mother glass presents for many occasions. My favourite objects as a child were a set of pink elephant swizzle sticks that I had found in the basement cabinet. So, I was lucky enough to know, at a very young age, the material that I wanted to work with.

What is the allure of the now-defunct glass factories whose artifacts you have been incorporating into your work?

When I was in graduate school (Tyler School of Art, Temple University), I started making sculptures similar to the pieces I make now but using all "new" glass. This glass was expensive and I was running out of money but wanted to make larger sculptures. One day I found a barrel of broken pink glass in a storage room. It was "cullet" from a factory in West Virginia, broken scraps of Easter candy dishes with rabbit and chicken lids. The colour was beautiful so I tested it out and it worked great. This was the start of what would become the body of work that you see today. I became very interested in the history of the material and the sculptures have grown as well as my knowledge of the pieces I am using.

Recycling is a big part of your work. Apart from the practical aspect of sourcing material how does it inform your artistic practice?

The material that I use is more "found" than necessarily recycled. Most of the glass I use is "cullet" that comes from an old factory that has now closed. Cullet is the factory scraps that get tossed into a pile after a production run of a particular coloured piece they are creating. I take the scraps, re-melt them (usually) one at a time and create my own shape from them. So, in general I am not re-melting pieces that are already in a salable form.  I do however incorporate pieces into my work that I have collected to tell a story, add volume, depth or pattern into the sculptures. I collect pieces that are the same colour as the cullet that I am using. I get very excited if I find an unusual character piece in a particular colour that I am working with at the time. People also send me boxes of old glass on a regular basis that I incorporate into my work.

Talk us through your work process. Do you design everything in advance or do you try out different things as you sculpt each artwork?

Most of my process involves hours of repetitive flame working (melting glass on a torch).  I build stock of parts such as flowers, leaves, pearls and my entire other library of pieces that are created by hand out of the old scrap glass; I use hand tools for this process such as tweezers, presses and bonsai sheers. At the same time that I’m making all of these hundreds of shapes, I also collect special pieces. They can be shapes, figurines or animals. I start to construct the piece in my head about the size and exactly what I want it to say. I have a carpenter who creates custom frames for the work and then when I have enough pieces and everything is in line I put everything together. This process is organic, other than the placement of the special shapes I just let it flow. It would make my totally crazy to plan where each and every single leaf or flower was going to be placed.

The pieces you create are a marvel of exquisite detailing. How time consuming and painstaking is the production of such intricate work?

The work is definitely time consuming and painstaking. I make 98% of the shapes in a sculpture by hand. I even create the hundreds of little pearls myself. Most of the pieces - especially the larger sculptures - take a few months to make. I guess it is just what I have grown accustomed to doing. I look at other sculptors who do tedious very detailed work and I can't believe it, but I think it's all about your tolerance for your own work.

Your work abounds with natural motifs such as flowers, feathers, and leaves. Does such naturalistic iconography reflect the prevailing aesthetic of glass manufacturers of yesteryear? How does it relate to your own sensibility?

Hmm…I don’t necessarily think that the glass of "yesteryear" has a prevailing naturalistic motif. There were a lot of different themes. I guess that the glass of that time that I choose to incorporate into my own work has that sensibility because I am matching it to my own. I like the work to look organic, natural and flowing, like it will just keep growing.

Most of the time you choose to stick to a monochromatic colour palette. Why is that?

I get this question a lot. I think that it would be completely overwhelming to not only have that much detail but also to incorporate a lot of different colours in a single piece. There is a technical reason why I don’t mix colours in a single element. The glass that I use is generally not compatible with anything but itself. It will crack if I mix it with another colour. So, that is why I started using the monochromatic palette. But, also I think that the individual components and the composition as whole can be appreciated more without an overwhelming mix of colours

Your creations hover between abstraction and figuration, hedonism and utilitarianism. Do you consider your work a bridge between Arts and Crafts tradition and modern art?

I have never thought of my works in those terms before. I definitely am drawn to work that is finely crafted and clearly shows the skill of a highly trained craftsman. But, I like the story and conceptual element to contemporary work. I think that both of these things can work together and create depth while showing the value of learning a traditional craft.

Many of your pieces are imbued with a spiritual, almost religious quality; they could be conceived as shrines, icon or talismans. Is this a reflection of the rejuvenating power of artistic creation, or a paean to the humble origins of the recycled objects?

I think that the shrine like quality of some of my pieces is a reflection of my historic references of art. My work is highly influenced by 18th century lampwork sculptures from Nevers, France. These often had a religious, or allegorical theme. I also spent a lot of time in Italy during my early 20's and was influenced by the way they built a story or shine around specific objects. I am collecting and elevating my collected and found objects by giving them a story and a final resting place.

What are you working on right now?

I have a solo show coming up in May at Heller Gallery in NYC. This will be my third solo show with them. I am in the depths of creating new work for this show. I have a lot of pieces in the works right now and it might be time to have a reality check about what is practical!

The pieces that I am gravitating towards lately are creating these story scenes, similar to "Bridesmaid's Search for the Desert Rose".  Pieces where I build a narrative around the collected pieces and intermix them with personal visions, dreams and stories of travel from my own life. The piece I am excited about the most right now has ballerinas, fish, swans and a view of the coast driving down the PCH from Santa Barbara to LA.