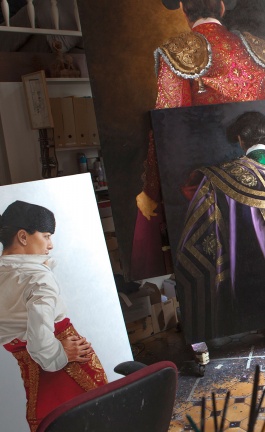 Named after its eponymous founder, celebrated French fashion house Louis Vuitton was established in 1854. It wasn’t until 1896 however, when Georges Vuitton designed the renowned ‘LV’ Monogram as a homage to his late father, that an icon was born.  The Louis Vuitton Monogram is universally recognizable.  Acting both as an identifiable signature and trademark that ‘announces’ the product’s origin and so attests to its quality, its Monogram canvas signifies luxury, craftsmanship, innovation, collaboration and artistry.

Over time, various motifs that are integral to the Louis Vuitton Monogram canvas have emerged, including: the shape of a diamond whose sides curve inwards with a four petal flower inserted in its centre, a pronounced four petal flower (the equivalent shape of that found in the diamond) and lastly, a circle that incorporates a flower with rounded petals.

Louis Vuitton’s Celebrating Monogram project is, all in all, a salute to its universal icon. In bringing the six creative iconoclasts - each questioning, nonconformist and boundary-pushing in his or her own way – on board, each were given the freedom to determine and produce whatever they desired (using the Monogram canvas). As a result, each piece of work in the project’s collection has a certain idiosyncrasy that typifies the designer that has created it.

Known for a number of famous and infamous structures, one of the most notable being the Guggenheim Museum in Bilbao, Canadian-born architect Frank Gehry turned his hand to ''try and make'' a handbag for the Celebrating Monogram project. The end result is an attention grabbing exterior with a dark blue interior designed to give the things in the bag more clarity. With regards to its shape, Gehry has applied his relatively unorthodox and nonconformist approach to create a sculptural object – which he has named the ‘Twisted Box’.

German fashion designer, creative director and photographer Karl Lagerfeld has contributed enormously to revolutionising the field of fashion - from appreciating and believing in the importance of ready-to-wear lines - to reinventing brands. In terms of the Louis Vuitton project, Lagerfeld has elevated the sport of boxing to new luxury heights, creating, as he says, ''a huge toy for spoilt, grown-up people!'' In addition to the ‘Punching Trunk’, there is a ‘Punching Bag Baby’, ‘PM’, ‘GM’ and ‘Punching Suitcase’ (which includes leather-trimmed Monogram canvas gloves). Extravagant, maybe a little ridiculous, the whole collection is definitely not for the faint hearted.

French footwear designer Christian Louboutin and his love for femininity and preoccupation with the contours of the high heeled shoe, evolved at a young age. His passion - which became his profession - has led to the Louboutin brand, an undoubted worldwide phenomenon. Born and raised in Paris, Louboutin decided to focus on something rather Parisian in the creation of his bag for Louis Vuitton - the shopping caddy. Named the ‘Shopping Trolley’, the result is a work of art in itself and combines the Monogram canvas with Louboutin’s trademark red (red-lacquered soles are his signature), golden-brass "trunk" corners and knotted leather ribbons. Extravagant to say the least, this is perhaps not a trolley best-suited for a trip to the organic farmers’ market.

Australian industrial designer Marc Newson is widely acknowledged as the most influential industrial designer of his generation. Known for typically designing things that he’d like to own himself, his creation for Louis Vuitton was a backpack. Adding an inventor’s flair, Newson designed it so that it could stand upright when free-standing. With a touch of joviality, he contrasted the Monogram canvas with a cheery furry sheepskin in red, blue or beige which although not immediately appealing, is a concept that has both merit and a certain charm.

Cindy Sherman’s Studio in a Trunk

American image-maker, film director and veritable creative all-rounder, Cindy Sherman often uses herself as her own subject in her projects. Her ‘Studio in a Trunk’ for Louis Vuitton features a colourful interior (its hues were inspired by the plumage of Sherman’s own pet macaw) replete with a luxurious vanity case, a Camera Messenger bag, a folding stool and a total of 31 drawers. The resulting trunk which is mesmerising in its punctiliousness and detail combines its exuberant interior with an exterior Monogram canvas which includes silk-screened patches recalling vintage hotel labels.

Japanese fashion designer (and founder of Comme des Garçons), Rei Kawakubo has been radical in much of her thinking regarding fashion and continues to contribute her input in all facets of the creative process. The premise of her work for Louis Vuitton was to break the iconic monogram - to do this, Kawakubo unostentatiously made holes in the bag; her way of doing something that hadn’t been done before in the House of Louis Vuitton. Admittedly, the resulting ‘Bag With Holes’ will not be to everyone’s taste; some Louis Vuitton aficionados might even consider it sacrilege. The bag also requires a textile insert pouch in order to keep the items  carried in it secure.