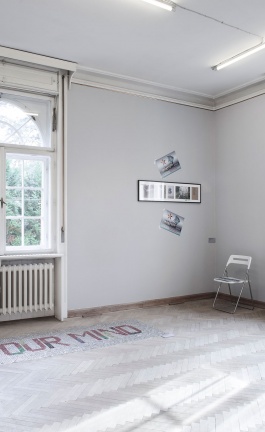 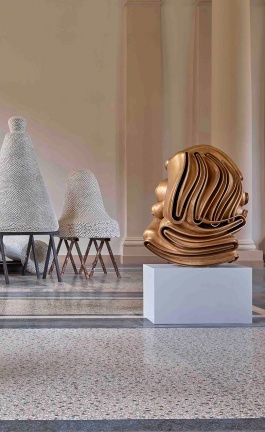 Branching off from an existing school building, the building has a rectangular footprint, replacing a covered section of the school’s playground, but commands a more sculptural presence due to its prismatic, steeply pitched roof geometry that makes it both stand out amid the surrounding cube-shaped blocks and look taller than its two-storey layout would suggest, crucially without obstructing views from the existing school complex.

The asymmetric roofscape, coupled with an irregular design of window sizes and arrangement, in the shape of floor to ceiling glazing for the dance studios, smaller openings for the music rooms and a larger trapezoid aperture for the lobby, is also tempered by the overall colour homogeneity as both the hand-made brick facades and the zinc panels cladding the roof are painted with the same off-white hue.

The pale exterior also fits in well with the creams and beiges of the neighbouring buildings allowing it to retain its distinct volumetric demeanor without antagonizing its surroundings. Similarly subtle, the word “CONSERVATOIRE” has been vertically inscribed on the southern facade by slightly extruding bricks that welcome visitors entering the premises through the main passageway, as well as highlighting, per the architects’ intention, the building’s verticality.

The interiors share the same idiosyncratic mix of minimalism and irregularity found in the exterior design. Dance studios on the upper floor are all-white, bright spaces, amply illuminated by daylight from the large windows to the east overlooking the playground, which also allow views into the studios, and skylights on the top of the sloping ceilings. The asymmetric roof design also provide for better acoustics as well as natural ventilation. Music rooms on the ground floor are also painted white but are more intimate, smaller spaces with smaller windows to minimize distractions.

For the circulation and reception areas on the other hand, the architects have chosen a more earthly palette of colours and materials in the form of tinted oiled oak floors and panels, dark clay-rendered walls and ceiling murals by French artist Marie Maillard that feature abstract shapes in deep, sunset hues meant to evoke the movement of dance and music, something that, after all, can also be said for the jagged shape of the exterior.

Dance studios on the upper floor are all-white, bright spaces, amply illuminated by daylight from the large windows to the east overlooking the playground.