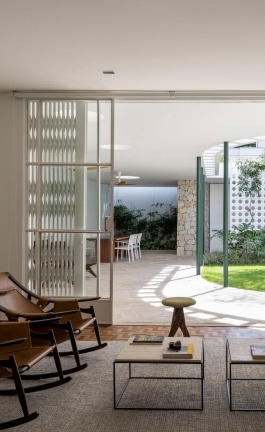 Casa CSF: A Modernist Gem Is Revived in São Paulo

Viewing the work of photographers is truly a unique experience as it allows the observer the opportunity to truly "see" through another person's eyes. That being said, it comes as no surprise that Italian photographer, Cristina Coral's photographic series Alternative Perspective brings to heart a truly different view of what could be familiar but often overlooked subjects and locations, therefore both proving its title and living up to its promise.

At first, Cristina hadn't orchestrated the results for the series. In fact, Alternative Perspective came about almost by chance. "During an editing session I rotated some photos [I had taken]," Cristina says. "I thought that altering the use of perspective creates a whole different perception. The title came spontaneously, and I immediately thought that it was perfect!" she shares when asked about how the series came about.

The elements featured in the photographs - the muted shades of pale pastel tones, the linear backgrounds and the austere yet feminine subjects in oftentimes unexpected poses - all conspire to create images that are at once super arresting and yet impossibly still. They also cause second (and third) glances. Take for instance the girl whose pink polka dot patterned dress and angled pose seems to blend into the pink swirly wallpaper behind her. Or, the girl in a pale gray skirt and cream colored top - the exact same colors of the large room she's in - lying on the diagonally patterned floor under a row of recessed ceiling spotlights; she too seems to fade into her environment.

We asked Cristina what, in her opinion, defines a good photograph. "The most important element of a photo it its ability to trigger an emotion, be it curiosity, anger, sadness, happiness, wonder…" she shares. Glancing through her other photo series proves that this is indeed something that this photographer focuses on in all her work. "Artistic freedom played a fundamental role in determining my style," she tells us. "My work is very often driven by the research of the beauty and aesthetic," she states, including that it is also "strongly influenced by a detailed analysis of the subject and the photographic environment."

Perhaps this freedom is due to the fact that Cristina is a self-taught artist who grew up in an artistic household - her father was a musical composer - and that she originally began taking photos "just for fun" using her mother's Bencini Comet II film 127 camera. "I understood that the camera could be a fascinating tool for exploring the world around me and more over [for exploring] myself. I'm still in the process of learning and experimenting which is unlikely to ever end," she says. As we take in these photos of Alternative Perspective, we look forward to all of the future perspectives that her lens is sure to reveal.