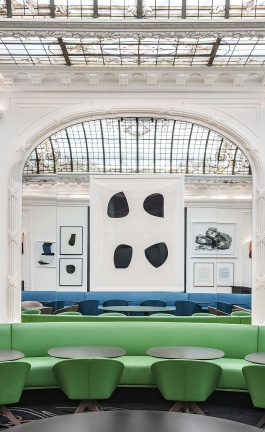 The Refurbished Hôtel Vernet in Paris by François Champsaur

''Man must rise above the Earth - to the top of the atmosphere and beyond - for only thus will he fully understand the world in which he lives.'' Plato

Earlier this year we presented the aerial photography of Zack Seckler, who transformed the wild landscapes of Botswana’s national parks into nearly abstract works of art. In a similar way, but from a significantly higher point of view, a new online initiative presents satellite images of our planet, which just like Seckler’s work possess the aesthetic of abstract visual compositions. The Daily Overview website was launched in December 2013, and as its name suggests, posts a daily image of our cities and our infrastructure as seen from space. From the deforestation patterns of the Amazon rainforest to the mind-boggling intersections of Japanese motorways, The Daily Overview features snapshots of Earth focusing on the artificial rather than the natural world. The initiative was inspired by a video released about a year ago titled ‘Overview’, where astronauts relate their impressions and emotions upon seeing the Earth from space for the very first time, also known as the Overview Effect. The Daily Overview project, through its website and social media feeds, provides a daily dose of awe-inspiring satellite photography – a good opportunity to take a moment and ponder upon the extent to which we humans and our civilisation have shaped (and in some cases damaged beyond repair) the face of our planet.

On the 40th anniversary of the famous ‘Blue Marble’ photograph taken of Earth from space, Planetary Collective presents a short film documenting astronauts’ life-changing stories of seeing the Earth from the outside – a perspective-altering experience often described as the Overview Effect.