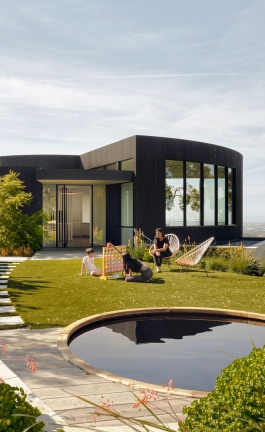 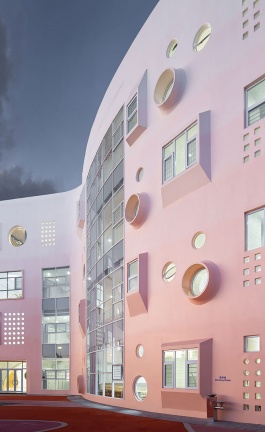 Unfolding across the ancient desert valley of AlUla in north-western Saudi Arabia, the second edition of Desert X AlUla shines a light on the region’s natural and cultural heritage through a series of site-specific art installations by 15 international artists. Building on the legacy of Desert X, which has been taking place every two years since 2017 in California’s Coachella Valley, the open-air exhibition draws on principles of land art, offering a profound opportunity to experience art on a monumental scale in dialogue with the spectacular natural setting. Inspired by the palm and citrus groves dotting the desert, this year’s theme revolves around ideas of mirages and oases, and in particular their historic, cultural and symbolic significance.

Invited to consider these ancient concepts, the 15 participating artists have responded with new works that address dreams, camouflage, fiction, dis/appearance, extraction, illusion and myth, while also examining the dichotomy between the natural and man-made worlds. Launched in collaboration with the Royal Commission for AlUla, the exhibition is running concurrently with the AlUla Arts festival as part of a national master plan to rekindle AlUla’s legacy as a vital cultural destination.

AlUla represents a long and intimate relationship between people and their environment. Framed by monumental mountains, the valley is a unique desert landscape featuring yellow sand panoramas, sandstone canyons and black lunar volcanic plateaus, as well as palm and citrus groves which historically offered a much-needed respite for travellers transporting spices, myrrh, cotton, ebony and silk. More than a trade crossroads between Asia, Africa and Europe, AlUla’s fertile soil and plentiful groundwater have given rise to numerous civilizations as thousands of ancient sites attest, from rock art and carved inscriptions, to tombs and settlements such as the 2,000-year-old Nabataean city of Hegra, Saudi Arabia’s first UNESCO World Heritage Site. A living museum of heritage, arts and nature, AlUla’s interlinked natural and cultural wonders provided plenty of inspiration for the exhibition’s participating artists.

Displayed amid a network of canyons at AlUla’s Al Mutadil valley, each installation interacts with the surrounding rock formations in its own unique way. Swiss artist Claudia Compte, for example, has translated the sound waves that are propagated by the valley’s landscape into wave-like patterns painted on a series of staggered walls. Part of an ongoing series of free-standing walls that straddle painting and sculpture, “Dark Suns, Bright Waves” is reminiscent of Bridget Riley optical paintings, drawing visitors in with its optical effects. Experienced amid the towering sandstone blocks, Compte’s black and white graphic patterns create an interplay between organic and geometric forms, nature and culture, and order and chaos.

The interplay of organic and geometric forms also underpins “Camouflage 2.0”, a series of polygonal sculptures clad in discarded camel hides by Emirati conceptual artist Zeinab Alhashemi. Camouflaged to look like rock formations, the prismatic forms are part of an ongoing series that explores the idea of camel skin as a commodity, these animals’ history and the culture of camel breeders.

Blurring the line between the natural and manmade, American artist Jim Denevan’s land art installation “Angle of Repose” is a sprawling composition of 364 sand hills arranged in concentric circles. As they become smaller in size the closer that they are to the centre, the sand hills speak to the shifts in magnitude and scale that so often shape our experience of the desert and our attempts to position ourselves within the vastness of unbounded spaces.

Sharing a circular footprint with Denevan’s work, Ramallah-based Khalil Rabah’s olive grove at first glance seems a more subtle intervention until you consider that olive trees are not actually indigenous to AlUla. Titled “Grounding”, Rabah’s oasis-like work is an exploration of territory, survival and citizenship, a symbol of all those displaced from their homeland. Fittingly, the trees will be replanted in a more suitable location once the exhibition ends.

Displacement is also one of the subjects addressed by Ghanaian artist Serge Attukwei Clottey who has shrouded a slab of rock in an enormous, meticulously crafted tapestry made from yellow kufuor gallons, a type of plastic container used in Ghana for storing and transporting water. Titled “Gold Falls”, the waterfall-like installation alludes to the experience of globalisation, migration and water equity.

Smaller in scale but just as mesmerizing, Saudi artist Shadia Alem’s mirrored sculptural installation titled "I Have Seen Thousands of Stars and One Fell in AlUla" adapts the art of origami, applying the basic principles of geometry to create shapes that reference the Arabian desert’s literature, mathematics and mythology, while Emirati artist Shaikha Al Mazrou’s steel-made inflated structures, "Measuring The Physicality of Void", which the artist has wedged in rock crevasses, strike a tense balance between stasis and movement.

It’s believed that approximately 10 million to 12 million years ago the area hosting the exhibition was actually part of the delta of what is now the Red Sea, as attested by the numerous shells that can be found in the sandstones. The connection between the desert and the sea inspired London-based artist Shezad Dawood’s “Coral Alchemy”, a pair of giant coral-like forms that explore the way our world changes over time, and the geological, biological and human-driven processes behind this - most notably climate change. The effect of the latter is poignantly conveyed by their temperature-sensitive surface which during the day is gradually bleached to mimic the impact of rising temperatures on coral reeds.

The relationship between the desert and the life forms that it harbours is also the subject of Los Angeles-based, Canadian artist Stephanie Deumer’s underground greenhouse titled “Under the same sun”. Working at the intersection of nature and technology, the artist has combined locally sourced stones with solar panels, the latter in effect replacing the sun by powering the growth lights that allow the native plants to grow despite the subterranean setting.

Inspired by the region’s most recent history, Polish artist Monika Sosnowska’s sculptural piece is made from heritage rails from the Hejaz railway which used to run from Damascus to Medina. Shaped like giant stems of grass, the installation alludes to AlUla’s historical position as a hub and passage of trade while symbolizing possibilities of growth and transformation.

Two Saudis round up the participants artists, Abdullah AlOthman, whose stainless steel plinths simulate the experience of witnessing a mirage, and Ayman Zedani, whose sound scape installation “The Valley of the Desert Keepers” mixes music, voices and footsteps. Running until March 30, Desert X AlUla’s multi-sensory installations reveal hidden and unnoticed aspects of the desert landscape and the cultural treasures therein, adding a new chapter in the region’s long-standing legacy of being a cultural crossroads.