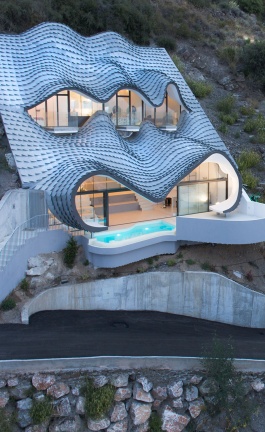 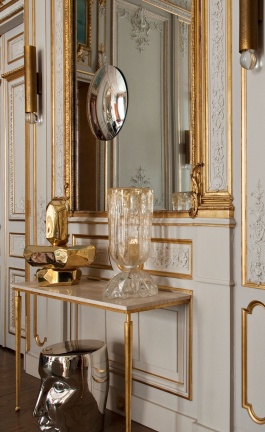 A Kaleidoscope of Uncompromising Design Ideas by Gestalten

DIMORESTUDIO Talks to Yatzer about Fendi’s Palazzo Prive and their latest ‘In...

As the beat of the music rhythmically enveloped visitors at DIMORESTUDIO’s Salone del Mobile 2016 exhibition at their stunning showroom in Milan’s Brera, the featured installations literally glowed between the low lighting, dark walls and labyrinthine passageways of the converted apartment. A sense of being transported also occurred, as visitors could be forgiven for forgetting that they were walking through an apartment in the middle of a large city and not through a splendid, aristocratic villa somewhere in the Italian countryside.

“Dimore means dwelling in Italian and it conjures up images of grand, patrician villas that are decadent but have fallen on hard times,” Britt Moran tells me from a sunny spot on the veranda where, among the flowering potted plants, he’s paused for a moment’s respite amidst the busyness of MDW. Interestingly, although both Britt and his business partner, Emiliano Salci’s, respective families have ties in the industry—Britt’s father had a home furnishing company in the U.S. and Emiliano’s family has a furniture company in Tuscany—neither took a direct path into the business. “We both thought that we’d do something different,” Britt says. For Britt that meant a degree in the classics and biology (“Which makes no sense!” he says with great amusement) before he and Emiliano met through mutual friends. A “fantastic” collaboration later, and the two teamed up their creativity by establishing DIMORESTUDIO in 2003. “It required huge investments in time, energy and money. Thankfully, it’s paying off!” A very humble description indeed…

DIMORESTUDIO currently consists of an “amazing” team of twenty seven people who follow the studio’s projects around the world. The hefty work load is divided between Emiliano and Britt, with Emiliano focusing on the creative and Britt making sure that things run smoothly on the business side. However, both regularly contribute to each other’s “focus roles” just as they have from the very beginning.

Although DIMORESTUDIO originally began as an interior projects company, their clients were constantly looking for bespoke items. So, the duo started designing unique items which quickly led to, “a huge drawer of designs that we thought would be fantastic if we ever did our own furniture,” Britt understates. During Milan Design Week 2005, DIMORESTUDIO held a small presentation of 5 furniture items which they christened, Projetto non Finito, (“unfinished project”) for one simple reason: “Interni magazine kept on asking us what we were going to name our line. But because we were still finishing up on the project, we just kept telling them, ‘it’s not finished yet!’” As the name suggests, the duo keep adding to the collection. “It began almost like a publicity stunt,” Britt tells me. “Because we were so small, didn’t advertise and we had the whole world ‘descending’ on Milan during these days. It was a fantastic way to get our name out there.”

Their partnership with Fendi began in 2014 when DIMORESTUDIO was invited to design Fendi’s “Roman Apartment” booth at Design Miami, a striking installation which focused on an artistic lighting installation, the idea of which was further developed with a large table, a bookshelf-like screen, a chaise longue and a separate wall sconce that wrapped around the booth. Britt says that Fendi, “Kind of mentioned that the Design Miami project might develop into an actual apartment in Rome.”

This Roman apartment in question now happens to be The Palazzo Privé at the newly refurbished, Palazzo Fendi, which was unveiled to the expecting public on March 11th, 2016. Emiliano and Britt focused on highlighting the innate elegance of the apartment which spreads across the entire floor, and features the quintessential elements that conspire to make any space grand—elaborate stucco work and moldings on the walls, towering ceilings, wide windows and herringbone wood floors. To this elegant foil, DIMORESTUDIO added an expertly curated blend of select vintage pieces—such as a rare Gio Ponti daybed from the 1970’s, a pair of armchairs designed in 1951 by Marco Zanuso and even a classical Roman sculpture—as well as their own designs, many of which debuted at Design Miami. These include the Conversation Pieces armchairs which feature croco intarsia, wood and Selleria leather, and the Vertical Light which is essentially a geometric sculpture suspended from the soaring ceiling in the Foyer. Meanwhile, the Dining Room offers its own take on luxurious living. The Lampada 036 from DIMORESTUDIO’s Progetto non Finito label, comprised of three parchment and brass lanterns, hangs over the impressive, metal and glass topped Grand Square table, and is separated from the living area by the exceptionally dramatic, lacquered metal and colored stained glass Bookcase. “Working in historical places is amazing, and the Palazzo Fendi was exceptional,” Britt says modestly.

So, how does a design studio follow such a triumph? Well, Britt and Emiliano have a few ideas…

Other than the continuing Projetto non Finito, and a vast assortment of residential projects worldwide (Britt cites a project in New York, one in London, two in Switzerland, one in Vienna, two in Italy and one in Paris off the top of his head) the week before MDW they also opened their second hotel—this one in Paris’ 2nd arrondissement—following the hotel they opened last year in Guadalajara, Mexico. “The Mexico project was a fantastic experience but also a challenge because of the distance… we’re used to working with our artisans who travel with us, but Mexico is a long way away. However, we also wanted to test our abilities of working with local craftsmen there because we wanted to give it a sense of place.” Both hotels nod towards the art deco period which works well for their respective spaces.

“We have a lot of things going on…” Britt replied when I couldn’t help but comment on how busy they are, “But we love to stay busy!” This of course is an understatement which is as refined as the designs which bear the signature touch of DIMORESTUDIO.