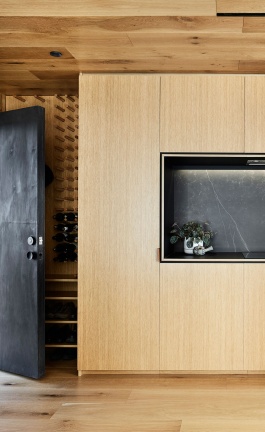 Even if you don’t know his name, you most certainly have come across some of Dutch artist M. C. Escher’s iconic, mind-bending prints, such as Drawing Hands (1948), the image of two hands drawing each other with a pencil, and Relativity (1953), an impossible, space-distorting interior of conflicting gravitational forces. 'Escher X nendo | Between Two Worlds' at Australia’s National Gallery of Victoria (NGV) in Melbourne showcases Escher’s extraordinary work in an immersive exhibition masterminded by Japanese studio nendo, one of the 21st century’s most inventive designers. As part of NVG’s strategy to forge creative links between the world’s most prominent artists and designers, the exhibition not only allows the public to view Escher’s fantastical prints and drawings up close but also to experience his two-dimensional work in a three-dimensional reality that transcends traditional gallery displays.

Covering the full span of his career, from 1916 through to his final work produced in 1969, the show features more than 150 of Escher’s most renowned prints and drawings from the collection of the Gemeentemuseum in The Hague, grouped in thematic displays designed by nendo as a physical embodiment of the artist’s ideas and interests. Varying in scale and spatial impact, and employing a variety of mediums, from architecture and furniture design, to lighting and animation, the series of immersive installations enable visitors to view Escher’s work in new, thought-provoking ways. “It’s as if they are walking inside Escher’s mind, but seeing the exhibition through their own eyes”, as nendo’s chief designer and founder Oki Sato explains.

Featuring impossible architectural structures, endless staircases and repetitive infinity patterns, Escher mind-boggling work challenges established notions around space, time and the everyday world. Acknowledged as a master of optical illusion, Escher’s lifelong subject was the innate artificiality of the drawn image. Based on logical, math-based ideas and underpinned by extraordinary draughtsmanship, Esher’s prints are intricate visual puzzles, made all the more potent by the orderliness of his compositions and the ordinariness of his subjects. As Escher declared in a 1963 lecture, “if you want to express something impossible, you must keep to certain rules. The element of mystery to which you want to draw attention should be surrounded and veiled by a quite obvious, readily recognisable commonness”.

The importance of rules explains Escher’s predilection for laborious printmaking techniques, namely woodcut, lithography and mezzotint, each with its own limitation demanding strict discipline. Woodcut and wood engravings in particular, of which he singlehandedly made over 300—all meticulously carved by hand using either the back of a small ivory spoon or a rolling pin for larger works—was his favourite techniques, exemplifying his practice of creating something highly complex out of something seemingly simple. A similar philosophy underpins nendo’s exhibition design which is centred on the simplicity of a house motif. Inspired by Escher’s logic-based processes, the humble house motif is inventively transformed in each section in a creative dialogue with Escher’s themes and ideas.

Starting with a selection of his early prints and drawings, which showcase Escher’s graphic power and technical range in a wide variety of subjects and styles, the exhibition goes into high gear in the section about ‘Reflections’, a recurring theme of Escher’s work. Starting in the early 1920s with self-portraits which he made using a reflective sphere, Escher exhaustively explored reflections over the next three decades using mirrors, flat surfaces of water, dew drops and even the human eye as pictorial devices through which he could unite different worlds in one composition. In response, the layout of this gallery is symmetrical with one side mirroring the other, an effect accentuated by shifting reflections of the house motif on the walls.

Another major theme that runs through Escher’s work is ‘the regular division of the plane’, a term that he devised to describe patterns made from repeated interlocking shapes, known as tessellations. Day and night (1938), one of his most famous images which he printed over 650 impressions of, perfectly demonstrates Escher’s mastery by combining tessellations with symmetry, optical illusion and association. Depicting a Dutch landscape of mirrored towns and waterways where day and night co-exist, it features interweaved flocks of white and black birds that ingeniously evolve out of the rectangular fields below. Displayed in the upper level of a split gallery alongside similar prints and drawings, the white and black sensibility of Day and night is evocatively matched by the white and black houses of nendo’s impressive installation on the lower level.

Conceived as a three-dimensional tessellation, nendo’s installation features rows of four black houses that gradually transform into rows of five white houses as their roofs gradually open up and out. Walking around and through the houses to discover additional works by Escher in free-standing displays, visitors could be excused if they felt that they had stepped into one a two-dimensional picture, an experience made all the more magical by Bach’s Goldberg Variations, selections of which play throughout the exhibition. Not only did Escher love the compositions of Bach, the work of both artists share formal qualities, as both artists systematically created compositions around the rhythm, repetition and symmetry of a single theme.

In the following gallery, which focuses on Escher’s exploration of extreme perspectives and optical illusion with such prints as Balcony (1945) where a scenic harbor-side town is playfully distorted with a spherical magnification, visitors are welcomed by a forest of black metal rods that take the shape of a house when viewed from specific angles. Inspired by Escher’s use of unusual vantage points and multiple perspectives that draw attention to the inherent deceptiveness of depicting the three-dimensional world on a flat picture plane, the rods allow the work to be displayed in an unorthodox arrangement which is further accentuated by a centrally located mirror structure.

Escher’s fascination with tessellations is interwoven with his desire to represent infinity. His tessellation drawings had implied endless repetition on a flat plan, as did the never-ending cycle motif featured in many of his prints, and his later use of visual devices such as the Möbius strip. In the mid-1950s, he took the concept even further when he began using regularly diminishing tessellations in circular compositions which nendo has re-imagined as a circular space in the middle of which a five-metre wide chandelier mesmerizes visitors with its more than 50,000 die-cut black and white houses dangling from the ceiling. The aforementioned Relativity print is displayed in this space as well as other iconic work such as Waterfall (1961), a gravity defying waterfall that flows perpetually around a closed circuit.

The exhibition fittingly concludes with Escher’s last print, Snakes (1969), displayed at the end of a serpentine white passage cut out of a black, waist-high surface and constructed, like Escher’s print, from interlocking circles. Considered his most absolute representation of infinity, Escher’s colour woodcut depicts three snakes slithering in and out of a lattice of rings that diminish both inwards towards the centre and outwards towards its edge, in an intricate, highly detailed design that embodies Escher’s technical brilliance, his inventive take on order and logic, and his love of the natural world.  As an afterword, visitors encounter a collection of objects that grew out of nendo’s research and design process. Titled ‘House for Escher’, the collection commemorates nendo and Escher’s memorable collaboration, as well as conveys the timelessness of the principles informing Escher’s art.