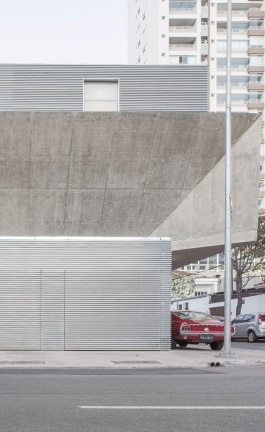 Working from Home: the Workshop House in São Paulo by PAX.ARQ

Federico Pepe could never be accused of not following his instincts. The son of an advertising artist, as a kid Federico could be found in his father’s home studio which was, as he says, “Filled with colors and paper and where I spent a lot of time ruining things!” After a happy childhood in a mountain village, at the age of eighteen he jumped on a train to the Italian Riviera with 5 euro in his pocket. “I asked for work at a restaurant and spent the summer washing dishes in order to pay for my flight and first week in London,” he reminisces when we meet at a sunny café in Milan’s artistic Brera neighborhood. And following a year-long stint in London, Federico found himself back in Italy when his father invited him to Milan to meet the young ad execs he worked with.

Federico was swept up in the advertising world, and attended college in Milan with a focus on art direction. In his third year he accepted a job at McCann Erickson while completing his studies (“To give my mother a diploma!”) which although proved to be hard work and “fun”, “I couldn’t do things I wanted, because I was always doing what somebody else asked.” Although a meeting with artist Maurizio Cattelan proved inspirational, Federico didn’t want to give up advertising to pursue art. “People told me to choose; but I was making my living on advertising. I wanted to do it all,” he says. Initial forays into gallery collaborations proved to be “a disaster” because artistically, he was being pressured into commercialization: “There must be a balance between the commercial and the art. I’m totally open to that system today. But then… it was difficult for me,” he confesses.

The situation pushed Federico to found Le Dictateur, which was originally conceived as an editorial project but soon took on a branding and design life of its own. A gallery space followed as well as organizing their first exhibition for which Federico called up artists whose work he admired and asked if they wanted to show it alongside his. “We have a saying in Italy: ‘You only need to ask,’” he says with admirable assurance. “My co-founder, Pierpaolo Ferrari, and I organized it exactly the way we wanted; something between an exhibition and a party… with an open bar!” Everyone loved the result, an easy balance of perfect preparation—thanks to his advertising background—and respect for the artists’ work. “Although we were serious about the work, there was a freedom because we weren’t a commercial gallery and only sold publications,” he says.

Fast forwarding ten years, at the beginning of April 2016, Federico and his partners held a big party in celebration of Le Dictateur’s anniversary, presenting a new publication, “FAQ”, which outlines their decade long story-so-far. The walls of the gallery were once again filled with art by all the creative’s Federico has collaborated while the event’s guest list featured artists, designers, authors and everyone in between.

Art world success aside, alongside his wife, Stefania Siani, Federico is the Executive Creative Director of DLV BBDO, one of Italy’s largest advertising agencies. “People still ask why I don’t drop advertising or drop art… but why?” he asks. “I couldn’t do just advertising, or just graphic design, or just art… I need the mix,” he says, sighting that he’d never attempt to suggest this as advice for anyone else. It’s just what works for him.

One of Federico’s recent projects is Credenza, a jewel-like furniture collection he designed with Patricia Urquoila exclusively for Spazio Pontaccio, which is based on stained glass windows. “Patricia and I have known each other for years and Alberto Pellini (co-owner of Spazio Pontaccio) and I have been working together for 2-3 years. He suggested this collaboration and, of course, we both agreed.” The innovative idea was something that Alberto had been thinking about for a long time and had discussed with Federico. The fortuitous creative collaboration that followed took many months to perfect, with Federico dipping into his extensive archives of graphic work for ideas and then producing new designs based on Patricia’s feedback. Then there was technique to consider, since stained glass is a very specific art and only select graphics can accommodate it. “There was lots of going back and forth,” Federico says, between him, Patricia, her studio and Alberto. But it certainly paid off; the collection is stunning and rightfully received stellar reviews when it was revealed at the start of MDW 2016. “It’s a magic thing when projects come out that way,” Federico says with justifiable pride.

“I’m not a ‘proper’ designer,” Federico says with honest modesty when I ask him what exactly he would title himself. “I care about what I do and the projects I select but titles can be limiting.” I ask him about the fact that sometimes his artistic work is signed under his own name and sometimes—such as his recent collaboration with Frette—under the name of Le Dictateur. “Le Dictateur is a brand,” he says. “It has a certain behavior and style which I don’t have personally. It’s something I built and use but I don’t want to be stereotyped by it.” Interestingly, he’s even presented exhibitions in his own gallery called: “Federico Pepe presented by Le Dictateur.”

So what’s next on the horizon for this seemingly tireless and prolific creative? The inauguration of Le Dictateur’s new gallery space; the release of an incredibly intriguing-sounding live album/videography project called “Coco” in collaboration with the photographer, Jacopo Benassi; as well as a new art project for which he’s painting “the greatest amount of portraits possible,” albeit without using sitting subjects, instead focusing on different portrait techniques and syntheses.

“For a long time the way I worked was ‘thinking… thinking… thinking’ and then finding someone else that could bring my ideas to life. Today, I want to think less and do more,” he says. “I’m always obsessed with the final goal. When I recognize that [goal] inside myself then I do anything in the world to get there.” And judging by how his instincts have, so far, lead him down the right, creative path, nobody can argue with that.