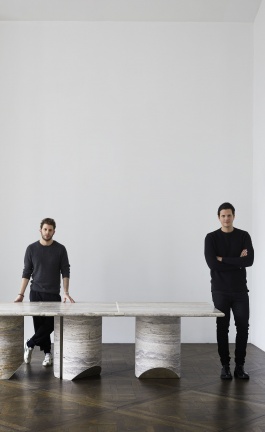 “How can we redesign our work environment to better suit the needs of today’s generation?” This is the question that inspired Fosbury & Sons’ founders, Stijn Geeraets, Serge Hannecart and Maarten Van Gool, in their quest to create a holistic, elegant, and people-oriented workplace. After successfully launching their “shared offices” idea in Antwerp in 2016, it is the peaceful suburb of Boitsfort in Brussels that now hosts their new communal workplace. This is actually the first out of three new sites they will be opening in Brussels within the year in order to bring, as they like to say, “work to life”.

Thinking outside the box is the knack of the company that named themselves after Dick Fosbury, an athlete who defied the norm and totally changed the world of high jump competition by introducing his own style. “I’ve worked for large organizations, I drank my coffee every day from a plastic cup, surrounded by clutter...I started to wonder, why does the office look like this?” argues Geeraets who believes that society’s perception of ‘working’ is already shifting towards a sense of autonomy, commitment without restraints, and the notion that time is our own to master.

If truth be told, we live in a time of communal thinking where the thin line between work and life is becoming even more blurred. People work and travel all around the world and the conventional 9-5 almost no longer exists. In this time of nomadic professionalism, a new type of workspace needs to cater to the unplugged, unattached creativity of a whole generation of people who are driven less by pay raises and more by respectful working conditions and inspiring surroundings.

A sense of togetherness where privacy is guarded and networking is highly encouraged through common working spaces and relaxing living spaces is exactly what Fosbury & Sons provides to freelancers, startups and larger corporations in need of a foothold to branch out from. Their Boitsfort office building covers 7,000 square metres of such workplace ethics, spread over seven of the nine floors -and three underground parking lots- of a modernist masterpiece of the seventies, located right next to the scenic Sonian forest.

The building itself once served as the headquarters of the cement company CBR, designed by Constantin Brodzki, the post-war architect who worked on the Oscar Niemeyer-designed United Nations building, in the United States. Brodzki, still very much into the scene at 94, considers this to be “the most modern building in Belgium”, and the architecture of the construction is an ode to the architect’s love of modern techniques he brought back with him from the USA. Its sculptural forms were so unusual at the time that they inspired a whole generation of designers while earning him a place in the ‘Transformations in Modern Architecture 1960-1980’ exposition at MOMA, making him the only Belgian architect to win the accolade.

During the restoration of the monumental building, the 756 organically shaped, oval concrete modules of its facade and their amber tinted glazings were kept intact, preserving the building’s impressive, Doric profile. Walking in through the discreet entrance, the warm feel of the luxurious, contemporary office interiors meets the powerful framework that preserves the building’s austere identity, in what is a happy marriage that evokes a new modernist reading, perfectly fitting of our century. The reception desk once selected by Brodzki himself is still here, restored, as is the spiraling concrete staircase he conceived back in 1970, together with its imposing lightness.

Design agency Going East of Anaïs Torfs and Michiel Mertens is to be praised for this nod of respect to the building’s original DNA. Materials were preserved, cupboards, furniture, built-in units, door handles, radiator caps, and wooden window casings were repaired, and structures were highlighted. New technology has met organic materials in a flowing and effortless manner, while the warm grey shades of the rough concrete have joined golden toned timber flooring, creating a serene working environment where there is no room for hostile, impersonal cubicles and harsh, artificial light. Large green plants share the light flowing freely from the large windows, while artworks curated in collaboration with Brussels galleries Rodolphe Janssen and Veerle Verbakel, artists Perry Ronberts and Florian Tomballe, and the Private Art Support Foundation, stand in place of the whiteboards and photocopied masterpieces usually found on office walls.

The lobby on the ground floor offers a bar for casual meetings, while the seven floors above provide several open workspaces, together with private office spaces called ‘Suites’ and shared private rooms called ‘Ateliers’. A restaurant by Coffeelabs, a bar on the eighth floor with a panoramic view over the forest, 15 highly equipped meeting rooms and an auditorium that can accommodate up to 75 people, make for a very alluring take on public office spaces. There’s even a pool table for lunchtime bets.

This inspiring workplace where individualism is celebrated together with teamwork, has managed to create an interactive cosmos where different professionals can work, meet and exchange ideas: Kind of like a LinkedIn space for the 600 people and 250 companies it can host. It seems like networking is the new career move to make, and this building supports just that.