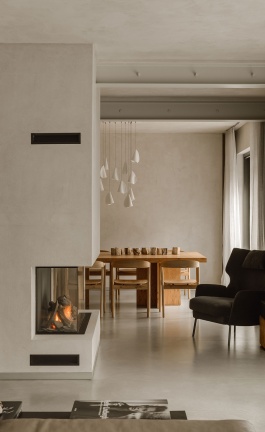 Taking over a two-floor, loft-style apartment in New York City’s Walker Tower, an iconic Art Deco building in Chelsea, Galerie Philia’s latest exhibition of collectible design offers visitors the chance to admire works of exceptional style and craftsmanship alongside breathtaking views over Downtown New York. Co-curated in collaboration with Italian architect and designer Pietro Franceschini, the exhibition is set up like a liveable apartment, showcasing over 70 works by 40 international designers represented by Galerie Philia, a Geneva-based contemporary design and modern art gallery with outposts in New York and Singapore. The exhibition, which runs until May 15, is part of a series of temporary exhibitions across the world aiming to introduce the gallery’s emerging as well as established designers to new audiences.

Built in 1929 by architect Ralph Walker, a key figure of the Art Deco architectural movement in America, the 23-story Walker Tower epitomizes New York’s Art Deco heritage with its Gotham-like set-backs, rhythmic brick patterning and external ornamentation. Its most impressive asset nonetheless can be found inside, especially from the upper floors, as is the case with Galerie Philia’s temporary venue which features panoramic views of the New York skyline, courtesy of tall ceilings and floor-to-ceiling windows throughout the apartment. White walls and dark hardwood floors round up the austere interiors allowing the furniture and decorative objects that are on display to take centre stage.

Exemplifying the gallery’s diverse roster of international artists and designers, the works on view range in discipline, materials and style but share a minimal aesthetic, albeit not reductive as Franceschini points out showcasing a neutral colour palette of mostly black, white and brass, along with a focus on craftsmanship. Sculptural in conception and primitive in sensibility, many pieces project a masculine vibe, but at the same time hint at a feminine side through sinuous, slender or evocative forms, while others hover between the natural and manmade, and chaos and order. Take for example, American designer Evan Fay’s “Lawless” hand-sculpted fauteuil which combines a chaotic tangle of foam tentacles with the geometric orderliness of a scaffold-like structure, or acclaimed fashion designer Rick Owen’s “Stag” side table made out of moose antlers and two plywood planks.

The marriage of organic with geometric forms is yet another connecting link between the exhibition’s heterogeneous pieces as attested by the stunning “Infinity” alabaster chandelier by Paris-based Atelier Alain Ellouz, Nina Edwards Anker’s twisted “Landscape” sofa for her brand nea studio, French ceramist Elisa Uberti’s stoneware table lamps, and the faceted, mineral-shaped sculptures by Awaré, a collaboration between sculptor Jérôme Pereira and visual artist Sylvia Eustache Rools. Other works embrace pure geometric forms like the ring-shaped “Gestalt” Bench by Belgian studio SMENT from designers Frederik Bogaerts and Jochen Sablon, the triangular “Alchemy” bronze and leather chair by Rick Owens, and the arched brass bench by the exhibition’s co-curator Pietro Franceschini.

More than a collection of beautifully crafted objects, the curators’ achievement lies in creating a coherent mise-en-scène despite their heterogeneity, a liveable space where nothing feels out of place or out of context. Set against the New York City skyline, the diverse works on display can’t help but echo the multifaceted yet harmonious urban landscape outside.