Light in the Dark: Show Caves by Photographer, Austin Irving 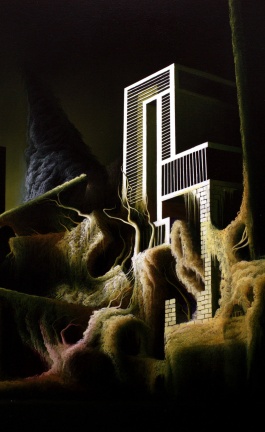 A surprise awaits the patrons of a furniture store in Hangzhou, China, once they walk up the concealed, narrow staircase in the center of the space, to the second floor: namely, the concept store HEIKE which was designed and realized by Shanwei Weng and Jiadie Yuan of AN Interior Design for the fashion designer, Laohei.

Entirely appointed in shades of black and dark gray and constructed out of a variety of industrial materials such as concrete, steel and aluminum, the concept store bends the idea of what a fashion boutique can actually be and appeals to customers who want to experience the designer's intentions behind the designs of their clothing. As such, project manager, Junjie He, created the Black Cant, a sculptural system that appears to have been assembled by painstakingly balancing a series of large scale, geometrically shaped sculptures in the middle of the room. The result is engaging and encourages interactions between the Black Cant and the concept store's customers, as well as between the Black Cant and the space itself. In fact, the space is wholly defined by it.

The "main character" of this striking assemblage is an enormous black wedge coated with a finishing of black marble dust which is seemingly precariously balanced on a selection of cones - think enormous ice cream cones with the tips cut off. This black wedge is also the space’s life-force, concealing within it not just the staircase that leads up to the store, but also its fitting room and stock areas, thereby masquerading the commercial elements of running a boutique behind artistry.

The store space surrounding the Black Cant also reflects the industrial, pared back elements as well as the play between matte and gloss that define Laohei's aesthetic - the rough cement walls and ceiling are juxtaposed by the polished floor, the shiny steel window frames and the mirrors placed throughout to lead to the feeling that their role is a supporting one to the central figure. Even the garments hanging from polished, aluminum racks around the circumference of the space seem to have been placed there in order to enhance the importance of the Black Cant and not the other way around.

Fittingly, AN Design describes HEIKE as "a poetic conceptual and spatial experiment to create an innovative example of interior design for an independent fashion brand," and they seem to have succeeded in creating the perfect black, blank canvas through which to convey the aesthetic simplicity and constructive complexity hidden within the garments themselves.