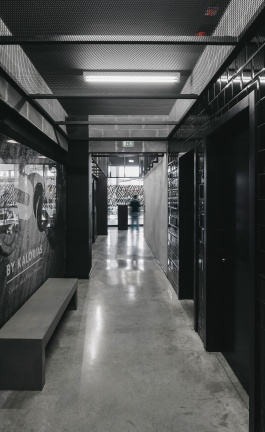 It was only seven years ago that the Experimental Group opened their first cocktail bar in London, bringing an opulent mix of attitude and rare spirits behind an unremarkable door in London's Chinatown. With its dark interiors and exquisite cocktails, the Experimental Cocktail Club soon became the epitome of a London speakeasy breathing new life into the city's night scene. Three bars and one members-only club later, and following the phenomenal success of their Grand Pigalle Hotel in Paris, the collective behind the Experimental Group unveiled their first London hotel this spring, quickly turning a relatively quiet corner of Covent Garden into a hotspot for all types of design lovers, bloggers and Instagrammers.

Situated on one of the area's quirkiest side streets, the Henrietta Hotel is named after the eponymous street, once home to the city's renowned publishing houses and booksellers. The hotel, stretching across two four-story townhouses from the late 19th century, comprises 18 rooms, one restaurant and, it goes without saying, a cocktail bar.

As you walk through the discreet entrance, there is something immediately familiar in the alluringly hip decor of the space: it is the skilful orchestration of Dorothée Meilichzon and her team, from the omnipresent Parisian design firm Chzon. The overall design theme moves from the elaborate contours, profiles and mouldings of the period buildings in the Covent Garden area that inspired the copious presence of bas-reliefs, capitals and arches, subtly reminiscent of stately London homes from another era.

Inside the rooms, plaster ornaments and mirrored surfaces are mixed with Chzon’s signature taste for the 70s combining Pierre Paulin-inspired armchairs with brass lamps and terrazzo-patterned carpets framed by a white-marble skirting. The headboards, another staple element of Chzon’s oeuvre, nod to the captivating geometries of celebrated Milanese entryways and are holstered with fabrics from Venetian powerhouse Rubelli. A seductive palette of reds, blues and greys is used in four different schemes to differentiate the bedrooms. Meanwhile, the pastel-pink hue of the bathrooms creates a strong chromatic partition fitting especially well with the dramatic fountain-shaped counter tops and the octagonal black and white tiles of the floors.

On the ground floor, the entrance to the restaurant and bar is conceived in continuity with the hotel, leaving virtually no room for a lobby thereby immediately pulling guests into a naturally coloured space of polygonal tables, plush armchairs, terracotta tiles and herbariums – together with the added element of the sumptuous conservatory on the mezzanine level. The highly-anticipated restaurant Henrietta is a partnership with enfant prodige Ollie Dabbous, whose Michelin-starred restaurant in Fitzrovia has been hailed as game-changing by London’s most exacting foodies: The ingredient-led menu is based on seasonal dishes with subtle French notes, while the drinks menu is inspired by Covent Garden's glorious past, created by the multi-awarded cocktail couple Jared Brown and Anistatia Miller.