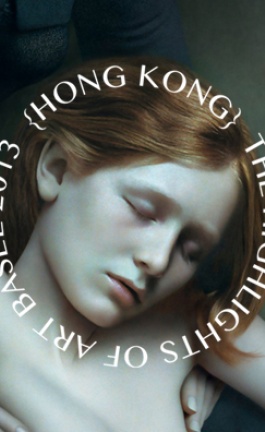 The Highlights Of Art Basel in Hong Kong {2013}

He is known for his penchant for super-cute, supersized and, above all, super flat characters who seldom evanesce from his brightly-coloured, highly-expressive compositions, be it in the form of trippy, meticulously-detailed paintings or towering, candy-coloured, wide-eyed cityscapes. Now, with his first foray into feature-length filmmaking, acclaimed Japanese multidisciplinary artist Takashi Murakami has ventured into what only seems like a natural progression: bringing these instantly-recognisable, genre-bending superheroes to life. In ‘Jellyfish Eyes’, a 101- minute-long monster movie which premiered earlier in April as part of the Film Independent series at  LACMA (Los Angeles County Museum of Art), Murakami has married a cast of flesh and blood young actors with an array of fantastical animated creatures who all inhabit an ‘experimental’ small town set in the Japanese countryside. It is there where, after having fled a catastrophe-stricken area, the film’s main human character, a ‘sad-looking’ boy named Masashi, befriends the eponymous Kurage-bo (Jellyfish boy) who belongs to an extraterrestrial species known as Friends. Only visible to children, each of the computer-generated monsters (which in true Murakami style come in all shapes and colours) belongs to a specific child who in turn is led to believe that they can control their special Friend via an iPhone-like device. As each of the monsters serves as a metaphorical representation of youthful angst, the children begin misusing their Friends to bully and intimidate each other, unaware that the Kawaii-inspired creatures play a pivotal role in a villainous ruse conceived to combine and convert the said negative emotions into a ‘supra-universal power.’ Soon enough however, Masashi and his fellow classmates decide to work together in order to defeat this wicked plan.

Clearly referencing the disastrous 2011 earthquake and the resulting Fukushima catastrophe, ‘Jellyfish Eyes’ conveys Murakami’s firmly-rooted antinuclear views whilst also drawing from the phantasmagorical Tokusatsu aesthetics, to which the artist was exposed during his own childhood.  In admitting how filmmaking was ‘much more complicated’ than creating a sculpture or painting due to his previous lack of technique, Murakami also quoted other iconic works such as Steven Spielberg’s ‘ET’ and the live action children’s television series ‘Power Rangers’ as sources of inspiration for his movie. Now with the successfully-received ‘Jellyfish Eyes’ under his belt however, Murakami has unveiled that he has no plans of abandoning this newly-discovered medium: having already shot a sequel to the first part on which he plans to start the post-production later this year, he is already planning the third part of the movie which he hopes to film in 2014. Let the adventure begin!