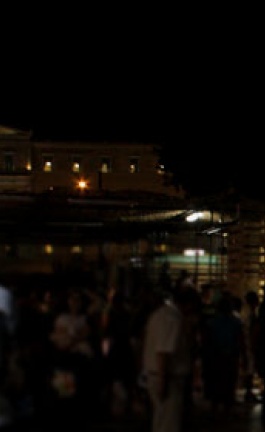 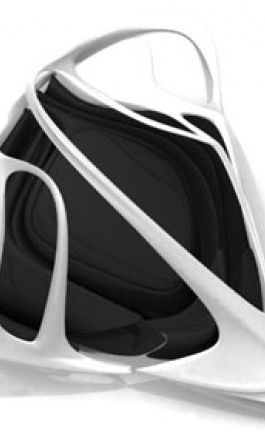 PS is a series of lights made using expanded polystyrene as a diffuser in combination with recyclable or about to be disposed domestically available objects in order to create a variety of types (floor, table, wall).
PS light series are on view during the Green Design Festival in Athens.
PS light series are yatzer's favorite RE-USE concept  part of  RE-DESIGN/RE-USE/RE-PAIR/RE-THINK project, curated by Constantinos Hoursoglou for Athens Green Design Festival.

PS light series / concept description by their designer, John Toubakaris
PS is a series of lights made using expanded polystyrene as a diffuser in combination with recyclable or about to be disposed domestically available objects in order to create a variety of types (floor, table, wall).
This project was conceived after the simple realization (after the casual office take out lunch) that recyclable plastics that are divided in 7 categories defined by the relevant logos are only potentially recyclable. In the case of PS, which is number 6, special facilities are required that aren’t available at most municipalities (PS is banned as food packaging in 20 of them in the US). In addition PS can only be recycled in an open cycle, which means that products produced by recycled PS can not be recycled again.
PS Buy a newspaper …
PS Order Take out.
PS Bring Your CDs.
PS Put them in the fav box.

Describe yourself in five words.
Introverted, intuitive, thinking and judging (sorry Jung-Myers-Briggs typology uses only four :))
If you could be a different nationality, what would it be?
As long as my roots are Greek, I could be any ... Maybe Japanese born by Greek immigrants. I love the fact that the Japanese have imbued with meaning even the most, in the eyes of a foreigner, insignificant things and converted them into rituals, and also the harmonious co existence of their tradition and the highly contrasted contemporary culture.
What's your favourite movie?
Edward Scissor hands always pops to my mind as a favourite and is one of the many.
What kind of music you like to listen?
Currently I listen a lot to "free the robots", Sebastian Tellier and Susumu Hirasawa.
What is your favourite design material?
The one that is just right for what I am working on. In the case of the PS light series even though polystyrene and its recyclability (or the lack of real world potential of it for that matter) was the focus, the red semi - rigid cable was crucial to the realization of the concept!
What is the most expensive piece of furniture in your house?
An Urban chair from Ikea which is pretty much the only piece of furniture I have ever bought.
What inspires you?
The stories (real or fictional) and the work of people that are passionate about what they are doing, give a damn about what is going on and beat the odds.
You are going for a weekend "somewhere" and you have to invite 7 famous people, dead or alive. Where would you go and who would they be?
Jan Chipchase, Stefan Sagmeister, Marc Newson, John Maeda, Jonathan Chapman, Don Norman, Vilayanur Rachandran. At a TED conference of course!
Are you afraid of the future?
The only thing that bothers me about the future is that it is infinite and none of us gets to see all of it.
Describe me the perfect day?
I don't have a recipe to a perfect day. Any day with the unexpected perfect moment I guess.
What does space mean to you?
Room for expansion, mental and physical.
Of your own design work, what project are you most proud of?
PS Light series, what are you waiting for? go make one!
Design is?
Observing the world around you and creating as an inextricable part of it.

© all photos by yatzer