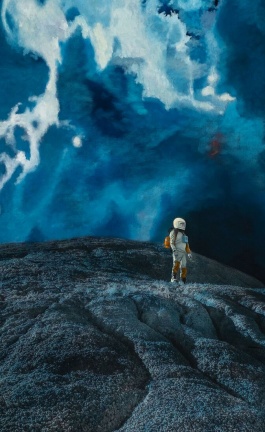 Los Angeles-based artist Jun Cha does not like labels. Although he has become famous as a tattoo artist, he embodies the Renaissance sensibility where the medium is always a means to a creative end. His transitioning from drawing to tattooing as a teenager was thus more a product of intuition than calculation. This “very basic, primal, childlike curiosity”, as he calls it, propelling him forward on his creative journey, has now ushered him into the realm of sculpture which Cha has wholeheartedly embraced with “CAPO”, a new limited edition series of skulls sculpted from Carrara marble, released on September 26th, 2018.

As is sometimes the case, this part of Cha’s creative journey, which is evocatively captured in short film that accompanies the series' release, also had a physical dimension. For over a year the artist moved to the Italian Apuan Alps in the legendary province of Carrara where he studied classic and modern sculpting under local masters. This choice of Carrara was not accidental. Not only do the local quarries produce some of the most exquisite marble but their history goes back through the Renaissance, think Michelangelo’s David, to Ancient Rome, two periods whose artistic legacy fuelled Cha’s creativity as he was growing up. “As a kid I always remembered these giant old master books on Michelangelo, Da Vinci, Caravaggio and  the like”, he says. “I had no idea what or who these people were but I remember being hypnotized by the overwhelming power of these paintings and sculptures.”

In fact, his work that has brandished his reputation as a tattoo artist draws heavily from the historical and mythological figures in the Greco-Roman, Renaissance and Baroque arts. Rendered in his signature black and grey palette—which reflects both his drawing background and the LA street tattoo scene—and enriched with modern symbols, Cha’s expansive, meticulously drawn, densely populated tattoos on breathing, living bodies cannot be viewed as anything but sculptures. In this sense, sculpting grew out of tattooing just as tattooing grew out of drawing. They are all manifestations of the same visual language that Cha has been developing from the very first moment he grasped a pencil as a kid and started drawing.

Tattooing and sculpting may share similarities in terms of process—inking a person’s skin and chiselling a piece of marble are both daunting endeavours because there are irreversible—but the sculpting techniques one needs to learn are a whole different matter, hence his year-long immersion in the quarries and workshops in Carrara. Embraced by the small local community, Cha describes life in the Apuan Alps as “simple because the most basic things are valued”. While the experience of treading the steps of artists such as Michelangelo imbued his stay there with a transcendental dimension, physically it was a whole different story; “progress in the mountain depends on persistence, you’re entitled to nothing and every single rock is earned through sweat and blood”, the artist explains. “It really was about overcoming my own limitations”.

Then again, focus, discipline and persistence have always been Cha’s guiding principles, “any transformation is through adversity” he succinctly says, and this couldn’t be a more accurate adage about the arduous work undertaken by the miners in the Carrara quarries. Cha’s first series of sculptures pays tribute to the their labour, as well as the artist’s own laborious path of learning the craft, through the title “CAPO” which is what the miners call their boss in Italian.

Hand-sculptured using both classic and modern techniques, the series depicts a skull wearing the laurel crown of Emperor Marcus Aurelius, whose untimely death speaks of life’s transient nature—an image that he worked on for years long before this project. The series is a classic “Memento mori”, a reminder of our mortality, that “life is sustained by the balance of death” as Cha eloquently puts it. But it is also a personal reminder that artistic progress should always be an uphill journey, “the moment I think I figured everything out, I’m in trouble” Cha confesses. The spectre of death or failure may always loom above us but ultimately that is also what motivates us, in art and in life.

Self-discipline is the key to executing any task at the highest level. Focus, discipline and persistence can seem like cliché words but for me it’s fundamental.