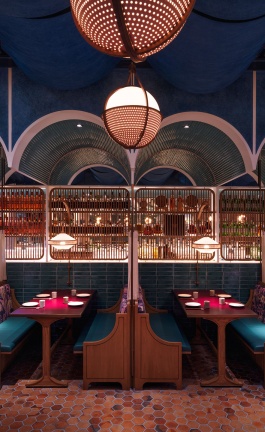 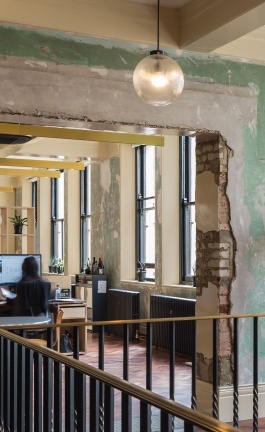 The cistern, which Kinsterna takes its name from, at the heart of the restored 17th century manor. Photo by Elias Joidos.

Taking advantage of the late November sunshine, we recently headed to the Kinsterna Hotel in the southeastern Peloponnese in Greece, a rural retreat centered on an exquisitely restored 17th century manor. Upon arrival we were escorted to the manor’s central courtyard where we were treated to a traditional “ypovrixio”, a spoonful of thick, white paste made from mastic resin dropped into a glass of ice-cold water. It was a welcoming gesture indicative of the hotel’s superb hospitality as well as an unspoken introduction to its evocative character where the past and the present coexist harmoniously. Sitting next to a large cistern, which the hotel takes its name from, filled with waterlilies, enjoying the seductive view of the legendary Monemvasia rock looming over the rolling hills, we immediately sensed the site’s uniqueness more clearly than any words could convey.

And that’s just in the first 15 minutes; as the days languorously unfolded, we gradually discovered a trove of hidden gems and historical curiosities such as a centuries-old olive press transformed into a lounge, a secret spring inside a narrow cave, and an antique shop that embodies the current owners’ passion for collecting vintage household objects, to name just a few. As satisfying was the discovery that the hotel offers all the amenities one would expect from a high-end resort, including a well-equipped spa, a pool overlooking the rolling hillsides, and a gourmet restaurant underpinned by a farm-to-table philosophy, courtesy of a fertile 18-acre estate that abounds with vineyards, olive and citrus trees, and vegetables gardens.

Originally built in the 17th and 18th centuries, the manor has been meticulously restored using traditional building techniques and repurposed materials. Photo by Cathy Cunliffe.

Mirroring the tumultuous history of the mediaeval castle-city of Monemvasia situated further down the coast, which after the fall of the Byzantine Empire changed hands between the Ottomans and the Venetians a couple of times before it finally became part of the nascent Greek state, the estate has had its share of noble owners and vying suitors courtesy of its unique location. Perched up high on the hillside, the fort-like manor was ideally positioned to monitor the area and repel intruders such as pirates or foreign troops—as was often the case at the time.

As importantly, the plentiful supply of spring water made the estate self-sufficient. The pivotal role of spring water as the literal source of the manor’s prosperity has not been lost on the current owners who have reinstated it as a dominant feature throughout the hotel’s grounds, from the majestic cistern at its heart, to the water channel that flows down the estate filling the pool, and the numerous springs and fountains.

Archaeologists date the manor’s origins in the middle of 17th century with several sections added a century later as can be attested by the amalgamation of Ottoman, Byzantine and Venetian characteristics such as vaulted ceilings, arched portals, and iron hooks to support vines. Meanwhile, battlements, gun holes and small openings speak of the manor’s defensive nature. The most distinctive element though is the relief plastering of the facades whose ceramic inserts give the manor its spotted appearance. As decorative as this treatment is, it is by no means an aesthetic choice but rather a centuries-old painstaking method for passive cooling and moisture control.

By the time the current owners purchased the estate in 2002, the U-shaped, two-storey manor had fallen into disrepair attested by the several sections that had been demolished, collapsed roofing and looted equipment. A stroll to the hotel’s library where showcased photos of the building’s ruined state further reveal the mammoth task that the talented team of architects, engineers and designers faced in 2006 when the renovation begun. Working in close cooperation with Greek Archaeological Service and using local craftsmen, traditional building techniques and repurposed materials, the team succeeded, after four years, in reinstating the manor to its former glory and at the same time creating a contemporary retreat of modern comforts and subtle luxury.

Nowhere is this more evident than in the manor’s spacious guestrooms and suites that combine historic features such as timber roof trusses covered with reeds, vaulted ceilings, and stone fireplaces, some of which are part of the original building, with luxurious marble baths, custom headboards and hand-crafted “embroidered” concrete walls. Meanwhile, the meticulous preservation of trap doors, fireplace mantels, cistern drains, gun holes and other architectural curiosities means that no room is the same, making Kinsterna hotel a living museum—albeit a luxury live-in museum.

The manor’s renovation was accompanied by the redesign of the surrounding landscape, the addition of several individual dwellings and villas designed in harmony with the manor’s rural aesthetic, and the construction of an annex to house, among other functions, restaurants, bar and conference centre. Featuring a series of gabled roofs whose timber structures allude to the area’s traditional typology, the annex is nevertheless a thoroughly modern building whose interiors have been enriched with traditional elements, such as embroideries and tapestries, re-imagined as contemporary installations.

The resurrection of the estate went hand in hand with the revival of its agricultural heritage, from the harvesting of grapes, olives and honey, to making olive oil and soap, baking bread, and distilling tsipouro, a traditional Greek spirit. The hotel even has its own wine label whose quality we can attest with the conviction that comes after consuming several bottles of red and rosé wine. The revival of such traditional practices not only gives guests a chance to observe and participate in such activities, but also makes Kinsterna the epitome of sustainability and self-sufficiency, not to mention supplies the hotel's three restaurants with fresh organic seasonal produce.

There’s not much we can say to top this simple luxury, especially if, like us, you appreciate home-cooked Mediterranean cuisine, but let’s add that guests can also enjoy a wide selection of body and face treatments at the hotel’s spa, tour the estate on bicycles or an antique horse-drawn carriage brought by the owners from Egypt, or hike the surrounding hills to discover Byzantine churches and Ottoman ruins (and we haven’t even talked about the historic sites and natural landmarks of the southeastern Peloponnese). Suffice it to say that you’ll probably think twice before leaving the Kinsterna’s amazing grounds.

The design team for the entire project ultimately comprised the following:

The entire restoration project took place with the cooperation of the 5th Ephorate of Byzantine Antiquities (Hellenic Ministry of Culture) using traditional construction methods and a plethora of repurposed and local materials.