The Incredible Transformation of a Stately Apartment in Barcelona 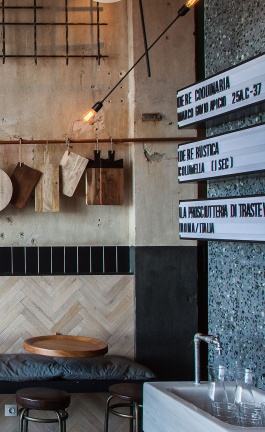 “Born one night simply when listening by chance to Bach's Saint John”, 33 year old French photographer Le Turk presents “Mundi Opera 2009-2015”, a compilation of photographs filtering French history and culture through his subversive lens of playful melancholy. Combining the decadent glamour of the Parisian cabarets with the stifled idealism of the Paris Commune, Le Turk’s aesthetic can be described as nostalgically baroque and melancholically surreal. His elaborate, tableau-vivant-like compositions, taking on average a week to set up and shoot, take place during a mysterious détente around a fictional, fin de siècle, raunchy neighbourhood—think Pigalle, home to Moulin Rouge and le Théâtre du Grand-Guignol—and depict dark scenes of woe, despair or resignation, tempered with a burlesque, almost comic sensibility. Creating a haunted narrative of post-traumatic dimensions, his characters seem resigned to ponder the past as much as the future.

Steeped in French cultural references, from the romanticized depiction of historical events by Eugène Delacroix and Théodore Géricault, to the gaudy nightlife depictions of Toulouse-Lautrec’s post-impressionist paintings and the scientific fantasies of Jules Verne, the pictures of Mundi Opera are also inspired by the artist's personal interests in -among other things- American comics, Mozart, Tom Waits and Fellini. Aesthetically, Le Turk’s imagery channels the work of several iconic, contemporary photographers, such as the surrealism and art-history references of David LaChapelle, the elaborate staging and dark undertones of Gregory Crewdson, and the hyper-stylized aesthetic of Pierre et Gilles. And yet his most influential sources seem to be cinematic—and distinctly French for that matter—such as pioneer filmmaker Georges Méliès, whose illusionist-based special effects combined the drôle with the fantastical, and film director and screenwriter Jean-Pierre Jeunet, whose filmography, in collaboration with Marc Caro, encompasses dystopian fantasies like Delicatessen and The City of Lost Children where Le Turk’s characters would feel right at home.