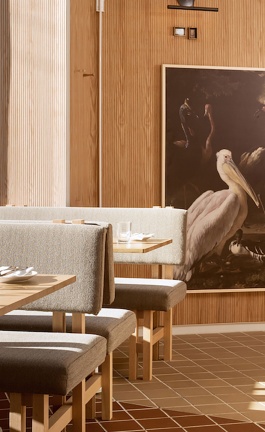 Matthieu Venot is a self-taught French photographer whose pictures capture the urban environment in a most graphic and transformative of ways. Focusing on the part rather than the whole, his photographs abstract his surroundings into colourful graphical vistas turning the quotidian into the iconic.

Egged on by his creative impulses and a desire to showcase his hometown Brest in Brittany and a sunny disposition, Venot, a former musician, took up photography after the band that he played guitar in broke up. Although his subject-matter is clearly architectural, his aim is not to promote architectural value or prestige but to imbue the urban fabric that surrounds him with freshness and exuberance.

To achieve this, he crops building parts out of context, zooms in on architectural detail or isolates certain building features thereby creating, in the process, strong geometrical compositions that have a life of their own. Balconies and staircases, for example, shed their utilitarian role to become two-dimensional flourishes while elsewhere façade segments lose their scale to become graphical abstractions.

Venot’s one prerequisite to go out and take photographs is perfect weather which ensures both a clean, flat background provided by the clear blue sky and more powerful, vibrant colours enhanced by the shining sun thus allowing for clearly defined lines, crisp geometric shapes and saturated colours.

But his adherence to good weather also goes deeper than those graphical aspects. A sunny day in conjunction with the sun-bleached pastel colours it brings out, mirrors, according to the artist, his “own personal optimism” and allows him to transmit it through his work where a humdrum city like Brest can be experienced like a utopian destination like Miami.