Driving Through The Woods of Euphoria 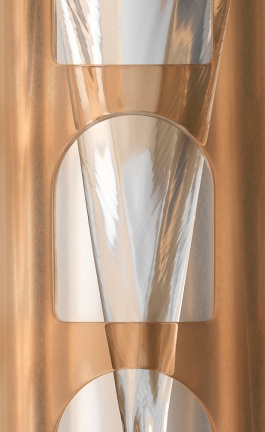 Located in Daliowa River Island, the smallest of over a dozen in downtown Wrocław in western Poland, NAWA is a futuristic architectural sculpture by Polish architect Oskar Zięta that reflects, both literally and figuratively, its historic surroundings. Organic in shape and mirror-polished in finish, the sculpture references the island’s shape while reflecting the lush natural landscape formed by the Oder River, while surreptitiously alluding to the city’s architectural history. Designed with the help of advance software and built using innovative technology invented by Zięta himself, the bionic installation is nevertheless inspired by the arched construction of some of the city’s most iconic Gothic and Baroque edifices, bridging Wrocław’s past and present through its innovative design.

Part of Daliowa Island’s revitalization program whose goal is to transform this once neglected and forgotten area into an inspiring space for socializing, concerts and artistic events, NAWA was unveiled in June 2017 on the heels of Wrocław’s stint as European Capital of Culture in 2016 to wide acclaim as attested by several accolades including being chosen by Architektura-Murator magazine as the most innovative Polish architectural project of 2017, and its nomination for the 2019 Mies van der Rohe Award, European Union's Prize for Contemporary Architecture.

Zięta’s visionary architectural sculpture sits on the cusp of art, design and science. Consisting of 35 bionic steel arches, it was designed using parametric modeling software which permitted the architect to manipulate its shape while ensuring that his design has the optimal size, weight, and endurance. If that sounds advanced wait until you hear about the construction process. Invented by Zięta, FiDU is an innovative technology that basically “inflates” sheet metal shapes that have been welded together along the edges by pumping compressed air. The revolutionary process transforms two-dimensional components into ultralight, durable three-dimensional forms.

Underpinning the technologically advanced design and production method is an age-old architectural structure, the arch. Popularized by the Romans and glorified by Gothic architecture, the arch is considered by famous French architect and designer Jean Prouvé an optimal form for modern constructions. It is also a ubiquitous structural element in Ostrów Tumski, Wrocław’s Old Town whose origins date back to the 11th century, and whose rich architectural heritage inspired Zięta’s design. From the 13th century, the Gothic Cathedral of St. John Baptist and the 17th century monastery that now houses the National Ossoliński Institute to the Market Hall built in the beginning of the 20th century, NAWA pays tribute to the stone, brick and wooden arches that have been built during the city’s history.

The construction process took place in a former shipyard where NAWA’s constituent parts were cut, welded and inflated before being transported on barges to Daliowa Island for assembly, a majestic journey that citizens and visitors were able to see from the streets, bridges and bank of the Odra River. Apart from the practical aspect, the use of barges was also a nod to the city’s past reliance on inland water transportation which has, over the last few years, lost its appeal.

Taking the form of a free-flowing extruded arch, the sculpture has undoubtedly become the island’s focal point, crucially without monopolizing the landscape due to its harmonious proportions and reflective nature. Resembling the surface of the water, the slightly wavy surface of the mirror-polished stainless steel arches playfully reflects the surrounding buildings and trees as well as the sky above which means that its appearance is in constant flux deepening on the time of day, the weather and the season. This chameleonic quality in conjunction with its futuristic sensibility that reflects rather than imitates the city’s architectural heritage is what makes NAWA such a delightful, modern edifice.