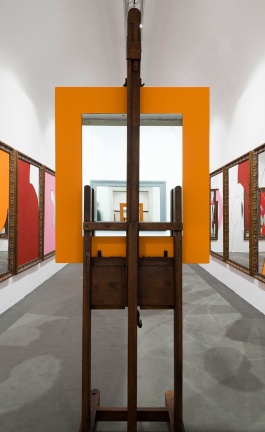 Home to Goldsmiths University, the alma mater of artists such as Mary Quant, Damien Hirst and Steve McQueen, New Cross in south east London is an up and coming, bohemian neighborhood teeming with young creatives. It is thus no surprise that bespoke house maker Chan + Eayrs, the atelier of architectural duo Zoe Chan and Merlin Eayrs, who buy and develop their own sites in order to ensure complete creative freedom, chose such artistic quarters for their second project, New Cross Lofts. The development, which is almost sold out, consists of two lofts and two work studios, which were conceived, designed, built and furnished in their totality as an artistic endeavor of contemporary minimalism and rustic elegance.

Chan + Eayrs describe their style as “Arts and Crafts, meets Japanese modernism, a dash of Wabi Sabi and Moroccan Earthiness, always expressed with a natural palette of materials”. Wabi Sabi in particular, a Japanese concept centered on the art of finding beauty in imperfection and profundity in earthiness, seems to perfectly encapsulate their approach whereby the aesthetic of lavishness, ornamentation, and rich materials that most high-end property developers usually embrace, is eschewed in favor of a design sensibility characterized by simplicity, modesty and intimacy.

A key aspect of this design philosophy is an appreciation of the ingenuous integrity of natural objects and processes. This is materialized through an emphasis on natural materials whose texture, patina and imperfections are juxtaposed with clean, minimal lines and volumes, as well as the use of specialized craftsmen like bricklayers, carpenters, stone-masons, blacksmiths and plasterers.

For the New Cross Lofts’ interiors, the designers have chosen a palette of white hues for the walls and limed oak for the floors, which, combined with large street-facing windows and the built-in cabinetry, makes the relatively small spaces light-filled and airy. The polished whiteness of the walls (finished in either plaster or timber paneling) also serves to pleasantly complement the rich texture of the oak floors which have been lime-washed to reveal their grain. Darker tones are only introduced by the window frames and an eclectic selection of furniture that include distressed wooden and upholstered pieces as well as antiques.

Light hues are also dominant in the bathrooms, which feature off-white, honed-marble tiles on the walls, while the staircase that connects all the floors is treated in more earthy tones with exposed concrete steps and raw-plastered walls; the latter, designed as a winter garden featuring extensive glazing, provides additional daylight to the lofts through large, handmade windows and floor-to-ceiling French doors.

The designers have approached the building’s exterior with the same combination of traditional craftsmanship, minimal ornamentation and modern sensibility. Referencing the brickwork of neighboring Victorian houses, the facade stands out both for the considerably lighter hues and for the herringbone pattern that Chan + Eayrs have ingeniously designed both as a potential hallmark—the same pattern has also been featured to great acclaim in their previous project, fittingly named the Herringbone House—and as an architectural statement of bespoke simplicity.