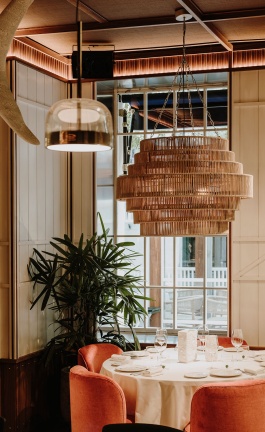 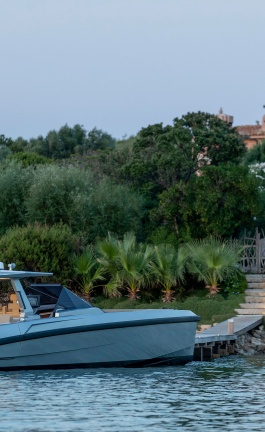 Following the long tradition of marking the land with a building, architect Adam Richards’ new family home in the South Downs National Park in the south of England dominates its pastoral setting with its monolithic, sculptural volume. Located on the site of a farm worker’s cottage, Nithurst Farm, as the family house is called, encapsulates Richards’ architectural sensibility as well as subtly references a trove of inspirations that have influenced his practice Adam Richards Architects over the years, from Andrea Palladio’s Villa Barbaro in northern Italy and Sir John Vanbrugh’s Blenheim Palace in Oxfordshire, to Robert Mangold’s abstract artworks and scenes from Andrei Tarkovsky’s film ‘Stalker’.

Externally the house is a mix of classical, vernacular and contemporary architectural languages, masterfully interweaved in a coherent form that seems both familiar and unique. Ascending in a stepped motion from a single-storey entrance on the north in line with the existing outhouses to a three-storey tower in the south, the house’s minimalist volume is juxtaposed with the classical shape of the arched windows, while the thick brickwork and black zinc roof echo a nearby 18th century tower.

The seemingly simple stepped volume of the building belies a richness of subtle details such as deep window and darker tone bricks around the windows on the east and west facades which evoke a sense of movement. Darker tone brickwork has also been used in the south façade to create a lattice motif that complements the rectangular geometry of the openings as well as offers an orderly counterpoint to the chaotic nature of the surrounding woods, as Richards explains. In fact, similarly to Vanbrugh’s Blenheim Palace, the house which sits on a wide clearing has been designed to be viewed from a distance.

The uncanny juxtaposition between classical and modern is also carried on in the interior. The exposed surfaces of the concrete structure imbue the spaces with a brutalist sensibility while the symmetrical floorplan and sequence of compact and expansive spaces, which are informed by Renaissance drawings and Palladio’s plan for the Villa Barbaro, evoke a sense of cathedral like awe and palatial grandeur.

Entering through a small side door, the only exception to the house’s symmetry, you step into a tall, church-like family room that includes the kitchen and dining area. Auxiliary spaces like the cloakroom, study and pantry are hidden in six peripheral concrete “towers” that create chapel-like side spaces enhancing the sublime ambience. At the far end, instead of an altarpiece, a modular textile structure by French designers Ronan and Erwan Bouroullec in collaboration with Kvadrat has been configured into a cloud-like composition that alludes to the sky in a painting by 18th century Venetian painter Tiepolo.

A door underneath the Bouroullec Clouds leads to a dark hallway which connects the family room to the sitting room. The ceremonial sequence of small and large spaces is inspired by the journey in Tarkovsky’s film “Stalker” where three men traverse the forbidden Zone in search of the Room, a space that grants a person’s deepest wishes. In Nithurst Farm, that special place is the imposing, light-filled sitting room that combines generous views of the surrounding landscape with an immersive collection of contemporary art and large tapestries.

On the upper floors, the private quarters comprise two children’s rooms with their own en-suite bathroom ensconced in the concrete towers and accessed via private staircases, three guest suites, and the master bedroom. Reached by a grand staircase hidden behind double doors, the south-facing master bedroom on the top floor offers sweeping views of the surrounding countryside, while being a marvel of symmetry with his and hers sleeping quarters and dressing rooms which lead to a shared north-facing bathroom that also enjoys panoramic views. Despite the exposed concrete walls and ceilings, the interiors are imbued with warmth and elegance, softened by pine floorboards and sisal carpets, and polished by reclaimed stone and brass fittings. Comprising multiple layers of reference and association, the house may be an architectural palimpsest reflecting Richards’ unique creative practice but above all else it’s a glorious place to live in.