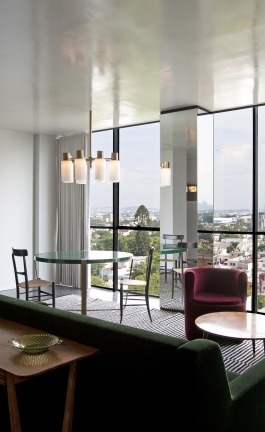 A collaborative exhibition between Beckmans College of Design, The Royal College of Music and The Nobel Museum.

How can genius in physics, chemistry, medicine, literature, peace and economics be imaginatively reinterpreted? That’s exactly what Fashion Students and Form Students from Beckmans College of Design (Beckmans Designhögskola), and Music Students from The Royal College of Music (Kungl. Musikhögskolan) in Stockholm were challenged to answer by the Nobel Museum. The inventive results of their labors were seen in Nobel Creations - the Nobel Prize 2015 as expressed through their respective mediums of fashion, industrial design and musical composition which went display at the Nobel Museum from December 4th 2015 through to March 6th 2016.

Ever since 2011—the first year that the Nobel museum initiated this collaboration—students have examined and analyzed the Nobel Prize winning works down to their respective essences before innovatively reimagining them. How else can one describe the Fashion Students’ interpretation of the 2015 Economic Sciences winner, Angus Deaton’s “analysis of consumption, poverty and welfare” as a giant receipt that wraps around and envelops the model, seemingly entangling her as she proudly shows it off? Or the musical composition of student Hannah Bylund who sings, “May we dare to dream,” as her analysis of the Nobel Peace Prize winner, The Tunisian National Dialogue Quartet’s “decisive contribution to the building of a pluralistic democracy in Tunisia in the wake of the Jasmine Revolution of 2011.”

An extra special touch to the exhibition came in the form of contributions from the Nobel Laureates themselves, who each donated an item that expressed the journey of their own personal creativity which culminated in each of them receiving their respective prizes. It seems that no matter the discipline, the unifying standard for Nobel laureates, student designers and composers alike is a simple one —creativity. For under its auspices a creator must not only possess the imagination to explore the unknown, but also the courage to uncover and decipher its secrets.