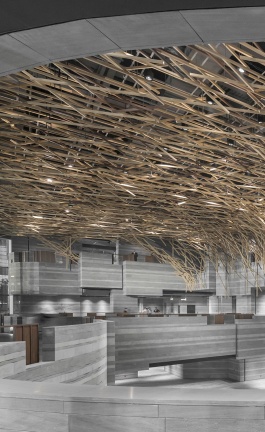 The HUB Performance and Exhibition Center in Shanghai by Neri&Hu

On Note: Miniature Illustrations on Sheet Music by Lena Erlich

New York based, Greek artist Panos Tsagaris burst onto the art scene in 2005 with his first solo exhibition "Theanthropic" and has since embarked, both artistically and personally—as these are undeniably intertwined, at least in Tsagaris’ case—on a journey of continual transformation towards a higher state, a “state of Catharsis” in the artist’s own words.

Drawing on the fields of spiritualism, esotericism and the Occult among others, his artistic process can be compared to that of an alchemist, as curator at large at MADRE Museum Eugenio Viola has poignantly observed, combining disparate elements, from contemporary life to quantum physics to mystical traditions, in order to achieve a masterfully calibrated equilibrium. This artistic-cum-alchemist transformational process aims at “capturing and expressing the restlessness and magic that exists in the soul of all of us” as the artist explains, in order to “elevate our ‘impure’ self to the level where it can reunite with our ‘Divine’ essence”.

Tsagaris’ earlier works, inspired by the idea of purification, include a series of photographs and performances (“Initiations” in collaboration with creative & art director Kimberley Norcott) where mystical symbols were projected onto his own body, as well as a series of drawings made out of the artist’s own blood as a reflection of the self-sacrificial aspect of his work.

“Golden Newspapers”—a series Tsagaris has been developing over the past few years and whose most recent pieces are part of his solo exhibition now running at Galleria Marie-Laure Fleisch (MLF) in Rome—engages more directly with contemporary socio-political issues by creating large scale reproductions of international newspaper covers, principally his hometown paper The New York Times, by covering all the columns of text and titles, except the paper’s name and lead story photograph, with gold leaf. Gold is a recurring element in the artist’s work as it signifies both the Divine, exemplified by its extensive use in religious iconography as the colour of transcendence and purity, and the artist-cum-alchemist’s ultimate goal, that of transforming humbler ingredients into something precious. In this sense, the topics they depict, be that the Greek recession or the refugee crisis, are elevated from disposable news items for instant consumption to sources for contemplation, thus transforming the covers into religious icons of sorts.

Gold signifies the artist-cum-alchemist’s ultimate goal of transforming humbler ingredients into something precious.

The process of transformation is also catalytic for Tsagaris’ latest series of large canvases (“Untitled”), developed during a residency at Hoopers Projects in L.A., several pieces of which are also exhibited at Galleria Marie-Laure Fleisch as well as the Kalfayan Gallery in Athens, where his solo show "TIME” ended a few days ago. For these works, transformation is both conceptual and painstakingly physical. Based on a series of installations of mirrors assembled in his studio, Tsagaris first takes pictures with his iPhone, prints them in large scale black and white copies, adds more mirrors on top and then re-photographs them. It is only when the mirrors lose their reflective properties that he then manually silkscreens the images on the canvas a number of times in order to create new forms and shapes. Certain parts are then finally painted over with acrylic paint, with more screen printing on top, whereas others are highlighted with 23k gold leaf. As Tsagaris explains, “the elimination of the reflective qualities of the mirrors symbolizes [as identified in many mythologies, Neoplatonism and early Christianity] the abandonment of materiality and ego (lower consciousness) while the golden details signify the birth of the divine essence (higher consciousness)”.

Tsagaris' paintings are the result of an elaborate process that includes photography, silk-printing and painting with acrylics on the canvas.

Back in his studio, Tsagaris is currently starting work on some new pieces for several upcoming shows and fairs, such as the Art fair in Brussels in April (with the MLF Gallery), the Armory show in New York in March (with the Kalfayan Galleries) and the Milano Art Fair in April (with the MLF Gallery). These new compositions (mostly works on canvas) are a continuation/evolution of his “Untitled” series of multi-media paintings based on the artist’s core manifesto of continual transformation “from something less to something more, to a fuller, richer existence in a personal as well as in a collective level”, perfectly exemplifying Tsagaris' ethos both as an artist and as a citizen of the world.