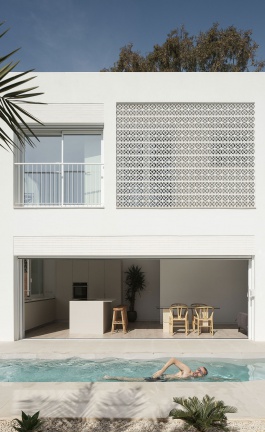 Darkrooms in sex clubs aren’t usually associated with design sophistication which justifiably makes Irish-born, London-based designer Domhnall Nolan’s latest project, PLAY PIECES a revelation. Commissioned by London’s newest queer kink night, Joyride, Nolan presents a mini collection of erotic furniture – a modular piece that can be used as a bed, loveseat and saddle among other things, a spanking bench and a cage wall – which arouse as much as they intrigue in their minimalist refinement and whimsical versatility. A self-described “subtle maximalist”, Nolan drew inspiration from vintage gym equipment and the sexual culture of the 1970’s, imbuing the series with his signature “chic sensuality” with an aim in to recalibrate “our collective ideas of kink furniture and create something that marries the worlds of design, sex and aesthetics”.

From private residences and experiential retail installations to his current role as in-house Senior interior designer at Soho House, Nolan’s commercial projects are complemented by their interest in themes of queerness in the design industry – after all, Nolan’s pronouns are they/their – which makes this project right up their alley.

Conceived as “non-prescriptive” so that people can feel free to react in their own way, the collection’s erotic sensibility is kept implicit. The most versatile of the three pieces, all of which have been handmade in London, PLAY PIECE 01, was inspired by a Japanese futon and consists of a series of connected boxy cushions in a cognac leatherette, that can be stretched out to create a bed or stacked to form a chair, loveseat or saddle. A metal folding leg frame that speaks to Nolan’s background in metalworking can be used to elevate the seat when required with the help of swivel hooks and chains allowing for even more different mounting positions.

Inspired by the traditional ‘Conversation Piece’, PLAY PIECE 02 is an adjustable spanking bench featuring a clear coated mild steel framing with handles and metal chain detailing, and cognac-hued leather cushioning. Like the first piece, the bench combines the smooth tactility and primal allure of the leatherette upholstery with the masculine robustness of metalwork to thrilling effect. “I imagined them having the joy of a sweaty disco but the sensuality and darkness of a techno rave”, as Nolan says.

As it was intended, the collection, which also includes a cage wall with multiple attachments, feels right at home in the inclusive queer playroom whilst not feeling at all  of place in a design-forward interior.