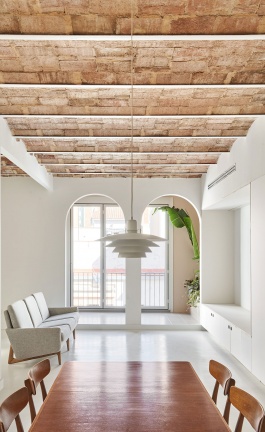 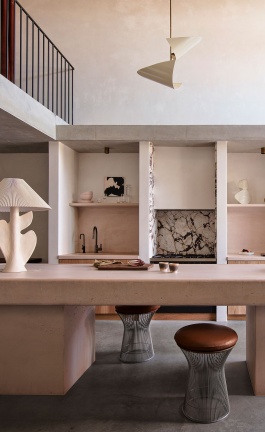 Since its launch in 2013, NEON, a Greek non-profit organization whose primary mission is to bring contemporary art closer to the public, has been breathing new life into numerous sites across Athens and beyond, from archaeological sites, to private gardens, to abandoned buildings, by organizing exhibitions that allow visitors to experience them afresh. NEON’s latest and most ambitious project is the transformation of the former Public Tobacco Factory, an iconic interwar building in the heart of Athens, into a new 6,500 square-metre cultural space. Founded by NEON and organized in collaboration with the Hellenic Parliament, the project commemorates the 200th anniversary of the Greek War of Independence as well as living through the pandemic. Inaugurating the new space, which opened its doors to the public last week, “Portals” is an international group exhibition curated by NEON's Director Elina Kountouri and Pritzker Director of Museum of Contemporary Art Chicago Madeleine Grynsztejn that brings together 59 artists from 27 countries, including 15 new site-specific installations commissioned especially by NEON, whose diverse cultural backgrounds offer a plurality of ideas underpinned by a shared aspiration to create a portal into a new, more humane and inclusive reality.

The choice of the former Public Tobacco Factory to host the exhibition goes beyond its architectural merits – the landmarked building is a paradigm of interwar industrial architecture – being more related to the building’s history which goes hand in hand with the country’s socio-political trajectory over the course of the 20th century. Inaugurated in 1930, the enormous 19,000 square-metre building was home to numerous tobacco factories, warehouses and a customs office, at a time when tobacco processing and cigarette production spearheaded the development of the country’s industry, commerce and banking sectors. The building later served as a prison, refugee shelter and workplace for several government agencies, before being granted to the Hellenic Parliament in 2000 to house part of the Parliament’s library and printing press.

From a key cog in the country’s 20th century economy, to a token of the ever-expanding state apparatus, to a repository of the country’s democratic institutions, to a contemporary culture venue, courtesy of NEON, the building is in effect a brick and mortars X-ray of modern Greek society. As such, it’s the perfect venue for a group of artists who critically look to the past in order to “become witnesses to and agents for the laying out of a possible new normal” in the words of co-curator Elina Kountouri.

The concept of a ‘new normal’ lies at the conceptual heart of Portals. Going back to ‘normal’ is not only impossible, but undesirable, as outlined by Indian author Arundhati Roy in her 2000 Financial Times essay “The pandemic is a portal” that serves as the exhibition’s inspiration. “The pandemic is a portal, a gateway between one world and the next”, she writes. “We can choose to walk through it, dragging the carcasses of our prejudice and hatred, our avarice, our data banks and dead ideas, our dead rivers and smoky skies behind us. Or we can walk through lightly, with little luggage, ready to imagine another world.” Roy’s manifesto is echoed by the exhibition’s participating artists whose work address outdated and problematic ideas, customs and practices related to collectivity, cultural understanding of history and politics, public space, and our common past, present and future, as well as the exhibition’s set up.

Kountouri and Grynsztejn have taken advantage of the sprawling industrial premises to sparsely place the artworks throughout the building’s renovated areas, from the imposing atrium and spacious halls and lofts, to the former Customs Office, to the more confined corridors and bathrooms, giving visitors plenty of breathing space between exhibits to contemplate the possibilities looming on the other side of the portals the exhibition conjures without feeling overwhelmed or as if they are being preached to.

The exhibition even extends to the building’s exterior and surrounding area, with Greek artist Nikos Navridis’ illuminated Samuel Beckett quote Try again. Fail again. Fail better. and Ever tried. Ever failed. No matter. mounted on the rooftop functioning in effect as both clarion calls and visual beacons. As visually mesmerizing and poetically instructive is Glenn Ligon’s Waiting for the Barbarians, an artistic take on Alexandrian Greek poet Constantine Kavafis’ famous poem of the same title inscribed in neon on one of the atrium’s facades. Commissioned by NEON, Ligon’s work encapsulates the poem’s timeless themes of cultural exhaustion, political inertia and societal navel-gazing by presenting nine alternative English translations of the poem’s most characteristic stanza that pose rhetorical yet poignant questions about our willingness and commitment to change.

Generously illuminated by the daylight flooding through the enormous glass roof, the atrium was conceived as a public space, an “agora” of ideas that envision, in the curators’ words, “a world in need of healing and unity”. Apart from Ligon’s work, the space also features photographic work by British filmmaker and artist Steve McQueen, a wall-mounted installation made from bottle caps by Ghana-born, Nigeria-based sculptor El Anatsui, and new work commissioned by NEON by Cypriot artist Maria Loizidou and Vietnamese, Berlin and Mexico City-based artist Danh Võ’s – all of which are large-scale pieces as befitting the atrium’s massive scale. At the centre of the space, Võ’s multi-part installation, part architecture, part urban furniture, part sculpture, further enhances the sense of public space.

In the corridor abutting the atrium, the works on display use language as an element of identity, negotiation or alienation. Mexican conceptual artist Teresa Margolles’ large collage of reproductions of newspaper covers from Ciudad Juárez, Mexico, conveys the brutality of reality, while the slogan-like texts painted on the walls by Cuban, US-based Felix Gonzalez-Torres mix personal and political messages. Further along, sculptural work by three generations of Brazilian female artists, Adriana Varejão, Sonia Gomes and Solange Pessoa explore the rich history of their country and colonialism.

In the former Customs Office, a site-specific installation by Nigerian fashion designer and artist Duro Olowu that mixes textural sculptures, painted work, video patterned wallpapers and wall lettering, explores ideas of migration and movement that aim to reveal hidden histories in politics and art, while in the bathroom area, a colourful, graphic mural by Argentine artist Ad Minoliti symbolically disrupts the separation between the two sexes as a reminder of the existence of other identities.

In one of the exhibition's larger rooms, Turkish artist Kutluğ Ataman and New York-based artist Adam Pendleton raise issues of social justice and racial equality, the former through a 40-channel video installation set up as a domestic setting where visitors get to sit down and watch an immersive sociological portrait of Küba, one of the most notorious ghettos in Istanbul which has been safeguarded by its inhabitants “from the rest of the society, state control and the rule of law which they deem to be unjust and corrupt” in the artist’s words. On his part, Pendleton presents a large group of framed Mylar transparencies in his signature “Black Dada” artistic practice, “a critical articulation of blackness, abstraction, and the avant-garde”, while work by the late Greek sculptor Jannis Kounellis nearby, echoes the working conditions of the industrial space.

On the mezzanine level, the exhibition touches on themes such as the development of informal networks and the power of social connections (whose relevance was highlighted during the pandemic-induced lockdowns), insecurity as a dystopian end to our common standard of living, and the concepts of trust and intimacy. The latter are explored through various representations of identity and home such as South Korean artist Do Ho Suh’s 348 West 22nd St., Apt. A & Corridor, New York, NY 10011, an installation that replicates to scale the artist’s New York apartment in baby blue and pink translucent polyester. Fusing traditional Korean sewing techniques with digital mapping tools, the maze-like installation, which visitors can walk through, is a physical manifestation of memory as well as a study on the malleability of space and the elusiveness of individuality. Monumental and yet unimposing, personal yet familial and intricately handcrafted yet technological advanced, Suh’s ethereal installation maps some of the contradictory forces behind the portals that the exhibition is curated around, and which, in the aftermath of the pandemic, we are individually and collectively being called upon to go through.

Running until December 31, 2021, after which the renovated space will be handed over to the Hellenic Parliament as a new culture hub, the ambitious project opens a new chapter in the building’s storied life as well as attests to NEON’s commitment to reinvigorating the country’s cultural landscape. Moreover, by sowing the seeds for a new, non-hierarchical kind of cultural institution, “a space where social and political strategies are rethought and reconstructed” as Kountouri says, the exhibition highlights the possibilities of a new, more equitable, pluralistic and humane post-pandemic normal - in other words, just what we individually and collectively need at the moment.