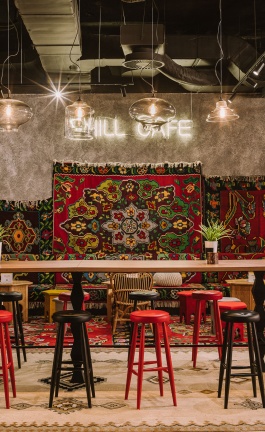 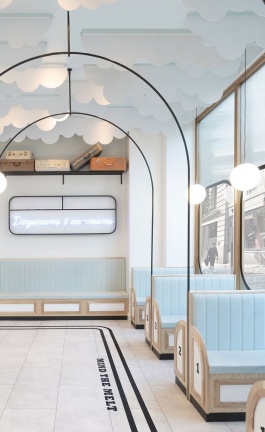 Mykonos is famed for its picturesque settings, luxurious amenities, sophisticated design and world-class fine dining, but it’s not that often that all four aspects can be found in a single venue. One such place that we recently visited is Reeza, a fine dining restaurant located a few minutes’ drive from Chora in Agios Stefanos, on the scenic premises of the laidback Mykonian retreat Rocabella Mykonos. Reeza’s name, which in Greek means ‘roots’, encapsulates the restaurant’s back-to-basics philosophy both in culinary and aesthetic terms. Harking back to a time when cooking with fresh produce was the norm in every household, the restaurant mines traditional Greek cuisine for flavours, recipes and ingredients to creatively produce dishes of contemporary finesse. Likewise, Rocabella eschews the flashy opulence and faux folklore of many resorts for an ascetic aesthetic of subdued refinement based on detailed craftsmanship and minimalist design.

Opened in 2016, Reeza quickly claimed a prominent position on the island’s fine dining scene. This being Mykonos though, where restaurateurs are vying to outdo each other and new venues pop up every season, resting on your laurels isn’t wise. To paraphrase Heidi Klum, in Mykonos’ culinary scene, one year you’re in and the next year you’re out, a maxim that Rocabella’s owner and general manager Roy Kalfopoulou knows well, so this season sees not only a brand new menu but also a newly refurbished dining space. Designed by Afroditi Bonatsou of Athens-based interior design studio Stones & Wall, Reeza’s new premises are part of a major renovation of the hotel’s pool terrace, which included a brand new pool, landscaped terrace, pool bar and reception, as well as the relocation of the hotel’s spa into a new space.

Nestled alongside Rocabella’s new infinity pool, behind the slender new wooden cabanas lined up on the water’s edge, Reeza’s new dining terrace enjoys a sublime holiday setting of understated luxury and languorous comfort, as well as uninterrupted views of Mykonos town, Delos and other Cycladic islands seductively looming across the open sea. The renovated terrace sports a muted palette of earthy tones and natural materials that harmoniously blend in with the island’s rugged landscape, and a furniture selection that combines a minimalist design aesthetic with a sense of traditional craftsmanship. Dispersed across the terrace, miniature, cacti-filled, rock gardens further enhance the rustic charm and subdued elegance. Austere yet sophisticated, the revamped Reeza wasn’t designed to make a splash but rather to embody the Mykonian prerogative of timeless beauty.

Drawing from childhood memories and age-old Mykonian recipes, Executive Chef Michalis Kikis, on his second year at the helm of Reeza restaurant, has created a nimble, fine dining menu based on traditional Greek cuisine, creatively reinterpreted through a contemporary lens. Prepared by Head in-house Chef Panagiotis Zafeiris, whom Reeza snatched from one-Michelin star Social Eating House in London, the menu embraces flavours and technique from across the Mediterranean celebrating Greece’s culinary heritage in a cosmopolitan manner befitting an island like Mykonos.

A choice of eleven entrees for vegan, pescatarian and meat eaters are complemented by an eclectic selection of starters and desserts, all of which fit onto a one-page menu – a patron-friendly gesture that is much appreciated. Starters that caught our eye include Prawn Carpaccio “Saganaki”, which marries Japanese, Italian and Greek culinary traditions into one painterly dish, crab and black rice filled ‘dolma’ which is served with a rich egg-lemon sauce, and the Smoked Beef Tartar ingeniously combining truffles with ‘metsovone’, a semi-hard smoked cheese from Northern Greece, similar to the Italian provolone.

Served on plain, hand-crafted ceramic plates and bowls, each dish is a delight for both eyes and palate. The Beet Cannoli for instance, an abstract composition of colours and shapes, looks like a painting by Surrealist artist Joan Miro, while the Red Mullet Escabèche, a nifty version of the classic Spanish recipe enriched with artichoke textures, pickled vegetables and a tomato vinaigrette, stands out in its figurative playfulness. We also utterly enjoyed the buttery texture of the celery hollandaise in the Cod Prassoselino, the Seabass Fricassee for its wreath-like composition of cockles, mussels and sea beans, and the superbly cooked tenderloin steak served with carrot mash, yogurt and a lovely lamb jus.

For desert, pastry chef Spiros Artelaris, who is also in charge of pastries at Scorpios, has created four exceptional desserts that perfectly complement the menu’s Mediterranean flavours. We were particularly impressed with the Sour Cherry, a glazed, ruby-red, cherry-shaped masterpiece sitting on a bitter chocolate crumble, and the Peach Carpaccio’s heavenly chamomile sorbet (our mouths are watering as we are typing this). Rounding up a stellar culinary experience, the dinner concludes with a selection of petit fours, colourful, bite-sized delights artfully prepared by Artelaris, which echoes Kikis’ delightful amuse-bouche welcoming guests at the beginning of the meal.

Three degustation menus give guests the opportunity to taste a wider, expertly curated selection of the menu that would otherwise require multiple visits, although, if you have days to spare, we’d recommend revisiting Reeza more than once. The glorious food, the immaculate service, the scenic setting, the laidback ambience: they all merge into a sublime evening that you’d want to repeat, again and again, preferably for an early dinner to bear witness to that most magical of spectacles that is the sunset over the Aegean.