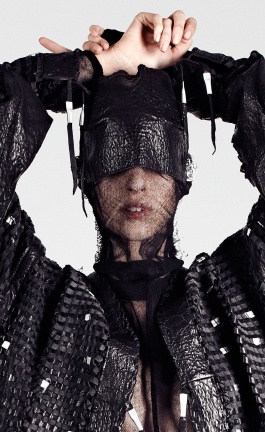 What happens when technology jumps out of the computer screen and becomes part of the clothes we wear, the streets we walk on and the floors we dance on? A self-proclaimed ''hippie with a business plan'', Daan Roosegaarde started out with sculpting and gradually fell in love with technology as he looked for more life-like materials to merge his wild imagination with useful innovation. But who would hire somebody to conceptualize the future? Is that even a viable profession? I hear you ask. Apparently it is, and it’s one that Dutchman Roosegaarde truly loves.

''I started the company 4-5 years ago. It was very naïve but with an incredible amount of energy; just me and a handful of people fleshing out our dreams,” he remembers. “Amazingly, we discovered there was a whole world of private collectors, museums and even cities that we could tap into.''

Focusing on interactivity as much as sustainability, the 34-year-old designer and his techno troops started exploring new ways of connecting people to their environment, which would soon lead them out of the galleries, out into the great wide open. And that’s where Studio Roosegaarde would stay, in public spaces, where it belongs.

During a recent talk at the famous Design Indaba Conference 2013 in Cape Town, South Africa the fearless trailblazer gave us a guided tour of the near future, a bombastic cocktail of visual poetry and groundbreaking technology that had everyone begging for more. Here’s what the future has in store:

DUNE
{An interactive landscape of light that brightens according to the sounds and motion of passers-by.}

A textbook example of techno poetry, Dune merges the physical with the digital world in a glorious walk of light. Dune is a web of fibers, LEDs and sensors that react to motion and sound, transforming the environment into an extension of whoever walks past it. Like a digital version of reed, it flutters illuminates  to the sound and sight of passers by then stores that information only to recover it when the time is right. There’s no manual and no sign telling people what to do, it’s just a permanent, vandal-proof channel of communication between humans and still life. In case you were wondering, Dune was also commissioned by the Rotterdam City of Architecture to liven up the Maastunnel, although Roosegaarde could have easily come up with this project himself! ''Sometimes when you become successful, you’re just copying what’s already there, but that’s not what you want,'' explains the studio founder. ''What you want is to evolve and innovate, so sometimes you have to commission yourself!”

INTIMACY
{High-tech garments made out of opaque smart e-foils that become increasingly transparent based on personal interactions.}

Who says you can’t combine business with pleasure? In 2010, Roosegaarde engineered one of his greatest hits in the form of ''Intimacy White'' and ''Intimacy Black'', a cross between electronic paper and liquid crystal that became transparent when people became sexually aroused! This cheeky, peek-a-boo fabric was tailored into a skin-tight dress, connected to the model’s heartbeat that caused controversy wherever it went. Some women claimed it was humiliating, while others said it marked a brand new era of seduction, all the while propelling Studio Roosegaarde into unprecedented stardom. Apparently they are now considering a new business suit version for the banking world that turns transparent when you lie!

SMART HIGHWAY
{New designs and technologies for the Route 66 of the future.}

If there’s one thing Daan Roosegaarde never imagined, that would be that talking about the work would be as important as the work itself. He always believed that all he had to do was make something and that people would figure it out themselves. He was wrong. In the past couple of years he’s become quite the celebrity in the lecture circuit, which has taught him a very important lesson: public speaking isn’t just about engaging the audience but engaging new partners. In one such presentation, he happened to catch the attention of Heijman’s CEO, one of the largest road manufacturers in the world, forming a partnership that is set to revolutionize the road system. Revisiting the idea of energy-generating landscapes, Roosegaarde came up with a line of paints that change color based on temperature warning drivers of bad weather which charge by day and glow by night. This genius concept not only eradicates the need for street lighting and electricity, but potentially allows for priority lanes that could charge electric vehicles as they drive along the road. ''My inspiration was jellyfish. How can they generate their own power so deep underwater without a battery or solar panels? There’s a lot to be learned from that!'' says the designer.

Daan Roosegaarde was beginning to get bored with all that talk about sustainability, solar panels and windmills, just to generate energy. After all, people did it every day just by putting one foot in front of the other.  Merging experience and innovation, he barged into the local nightclub scene harvesting energy with a specially designed floor that generated electricity when you danced on it! The thrill of conquering uncharted territory and coming up with a proposal that would fit that specific environment was just the icing on the sustainability cake. His energy-harvesting floors are currently touring the club circuit as we speak, proving that sustainability is not about doing less, it’s about doing more.

''The physical world is crashing, both in terms of economy and energy. Europe almost feels like an open-air museum. The previous generation screwed up pretty good so it’s up to us to merge innovation with imagination, bring together entrepreneurs with artists, and make things that feel open and alive. It’s our turn to propose the future…'' Amen!