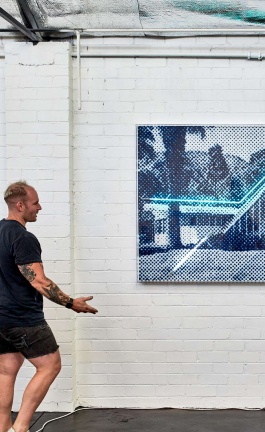 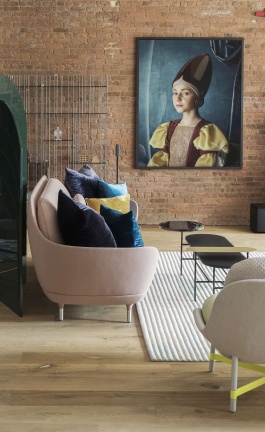 Inspired by one of the most memorable and funny quotes from the late Greek actress Rena Vlahopoulou, “Suzi Tros” is a new Greek bistro and cocktail bar in London’s Notting Hill that combines an easy-going, charming ambience with a seasonal menu of painterly small plates that look as enticing as they are tasty. Opened by entrepreneurial husband and wife Adrien Carre and Christina Mouratoglou, the team behind the well-established modern Greek restaurant “Mazi” a couple of doors down the road, Suzi Tros was conceived as a laidback eatery serving soul-nurturing Greek food in a setting of nostalgic conviviality.

The 1960s are considered the golden age of classic Greek cinema and half a century later the movies of that time are just as beloved as ever – the fact that there are weekly reruns on Greek television stations doesn’t hurt. One of most famous and most prolific comedian actress of that era was Rena Vlahopoulou whose boisterous, larger-than-life personality made her a household name. The bistro’s name comes from the cult 1969 comedy “I Pariziana”, or “The Parisienne”, where Rena, in the role of a seamstress, tells Suzi, a plus-size customer who has come for a fitting, that she must have been eating too much because the dress she’s making for her is too tight. The quote, literally translating as “Suzi you’ve been eating”, has evolved into a beloved catchphrase that far from shaming, playfully jokes about the irresistible pleasure of eating, making it the perfect name for Christina and Adrian’s new project which has been inspired by the informal eateries dotted across Christina’s hometown of Thessaloniki, considered Greece’s culinary capital.

Suzi Tros unfolds across two floors, with an upstairs light-filled, 32-seat dining room featuring a 5-seater kitchen counter, and a cosy cocktail bar on the ground floor serving a menu of drinks and nibbles. Underpinned by a palette of natural materials and earthy colours, the dining room subtly combines a traditional Greek vibe with a French bistro elegance, not unlike Rena Vlahopoulou in “The Parisienne” where she plays a Greek seamstress who has to pretend to be a Parisian couture fashion designer.

Timber ceiling beams and decorative floor tiling echo the folkloric interiors of age-old Greek restaurants while the sumptuous leather banquettes, elegant bentwood chairs and brass light fittings imbue the space with a Parisian ambience. The same hybrid aesthetic has been applied to the bar downstairs, where a lower ceiling height coupled with dark blue walls make for a more intimate space. Clad in wooden slats and featuring a backdrop of glazed grey tiles, the bar, which serves cocktails using lesser-known Greek spirits such as Mastiha and Tsipouro, would feel right at home in a 1960s Greek film.

Drawing from the breadth of Northern Greek cuisine, and using only fresh and seasonal ingredients, Head Chef John Skotidas has created a menu of small dishes that are updated on a daily basis depending on the day’s market deliveries. Much of the fun in dining at Suzi Tros comes from witnessing the cooking process. Raw options such as Prawn Tartare and Sea Urchin are prepared in front of guests while dishes like Whole Grilled Calamari are cooked on the open charcoal grill behind the kitchen counter. Meanwhile, vegetarian options such as Smoked Aubergine with Tahini & Honey, Artichoke Hearts, and stuffed Courgette Flowers Gemista taste as delicious as they sound. But perhaps the dish that best encapsulates both the bistro’s cross-cultural sensibility and Rena Vlahopoulou’s chameleon film character is Armenonville, an ice-cream-based dessert that traces its origins back to France – it takes its name from Pavillon d'Armenonville at the Bois de Boulogne in Paris – but has since become a speciality found in patisseries all over Thessaloniki and northern Greece. So no matter how full you are, you won’t be able to  say no to a dessert like this which is exactly what Suzi Tros is all about.