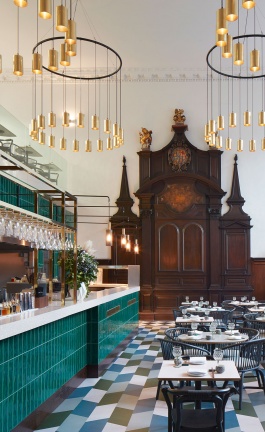 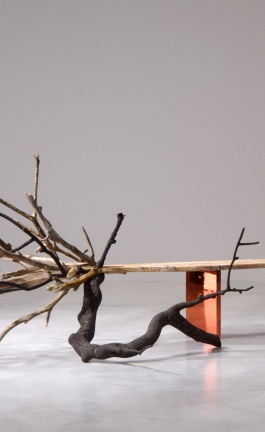 From the street, the Clerkenwell home of architects Anna Liu and Mike Tonkin in North London is undistinguished from the adjoining spruced up late Georgian houses. But enter inside and it’s a whole different story where white idiosyncratic interiors give way to a retro-futuristic back yard. Called the Sun Rain Room, the extension is both a lush garden and a sun room where vegetation, water and light come together in a lyrical space of shifting reflections where the pair can enjoy London’s mercurial weather.

Twenty years in the making, the house where Liu and Tonkin now live and work, encapsulates the holistic approach of their architecture practice, Tonkin Liu, which looks to nature as inspiration for technical innovation, sustainability, systems integration and the careful curation of light. Divided into flats and bedsits, and seriously run down, the entire house came into Liu and Tonkin’s ownership incrementally with the last acquisition being the basement flat, finally allowing them to build the Sun Rain Room and to connect it with a new basement extension underneath.

Conceived as “a good place to be on a bad day”, the Sun Rain Room, as the name suggests, takes advantage of the shifting weather for both practical and aesthetic purposes. Dominating the space, a sinuous, planted roof encircles a central bean-shape courtyard paved in dark granite. A black drainpipe climbs down the building’s rear wall to meet the new roof, coiling along its internal contour and terminating above a long black steel trough set against a black boundary wall and lined with vegetation. On rainy days, rainwater flows down through this elaborate pipework gushing out into the trough. Even more impressive, with a push of a button the trough overflows turning the central courtyard via concealed pipework into a reflecting pool as the water rises through the joints between the granite paving blocks.

The sloping roof shelters a glass enclosed sun room—elegantly furnished with a compact, light blue Allermuir sofa and a plethora of potted plants—and an adjoining outdoors dining area where Liu and Tonkin can enjoy the micro-landscape as the sun and rain temperamentally wash over it. At the back, a mirrored wall further enhances the manifold reflections that the elaborate combination of water and glass produce in conjunction with the black and white colour palette. Puncturing the roof look like inverted lunar craters, small glass-domed holes give the space, along with the ubiquitous vegetation, a retro-futuristic sensibility while echoing the ripples that the raindrops make on the reflective pool when it rains.

Meanwhile, the basement level has been extended under the revamped yard to include, besides a sitting room that occupies the original space at the front of the property, a bedroom with an en-suite bathroom which is generously daylight via a new light well. While renovating the original space, the removal of plasterboard coatings revealed timber wall panelling and a fireplace, hidden until then, both of which were refurbished with a sense of modern elegance—the panelling repaired, the fireplace now housing a wood-burning stove. Taking a cue from the living room’s timber palette, the bedroom features a plywood curved wall that doubles as a headboard and gracefully separates it from the bathroom.

A mostly white palette is predominant in the rest of the house, including the duo’s work space on the first floor, complemented by a selection of eclectic decorative flourishes like Liu’s colourful tapestry of Chinese jackets hanging at the top of the staircase, a souvenir of her Taiwanese origins, several collections of seeds and shells, and a plethora of architectural models. The interiors are also punctuated by strategically placed mirrors in both obvious and surprising places—above the mantelpiece, behind shelves, in cupboard doors—that pick up the Sun Rain Room's symphonic fluctuations of light and the ever shifting reflections, evocatively encapsulating the owners’ desire to harmoniously integrate natural elements into their designs.