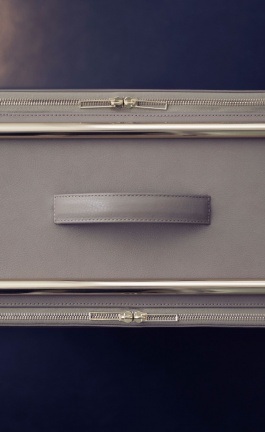 The KAGE Trolley Suitcase by TSATSAS For Wallpaper* Handmade 2013

The source of inspiration for designers and the evolution of creative practices will always be a fascinating subject. The Textile Museum in Tilburg recognised this and commissioned an exciting exhibition called ‘Turkish Red and more’, which forefronts the importance of design and the continuation of creativity through the development of ideas and practices. The five designers BCXSY, Lenneke Langenhuijsen, Merel Boers, Minale-Maeda and Studio Formafantasma drew inspiration from museum archives and collections to create new pieces.

The fresh projects sit alongside the items they were inspired by thereby ensuring that this exhibit really explores the evolution of old and new techniques and crafts, the development of creative processes and the progression of creative ideas and practices. The designers took their inspiration from varied areas of the collection: from the history of art nouveau weavings, objects from the Art Deco period, sample books, colouring recipes, blankets and, at the heart of the exhibition, Turkish Red. The resulting techniques have been re-interpreted by the designers using modern techniques such as laser cutting, knitting, digital printing and knit programming and the results are truly mesmerising.

The basis for the collection was formed by the ‘Turkish red’ project from Studio Formafantasma - which became the name for the entire exhibition. Turkish red is both a colour, made from the root of the rubias plant, and a recipe which includes some of the most researched pigments in history widely used to dye cotton in the 18th and 19th centuries. It originated in either India or Turkey, and was brought to Europe in the 1740s. The Driessen family collection ( the family is known for their Leidsche Katoen Maatschappij textile company) constitutes the founding collection at the museum and contains archives on everything in the field of printing and dying. Felix Driesen’s fascinating study onTurkish red, entitled ‘étude sur le rouge Turc’ received a prestigious award in 1902 and explains how the colour travelled throughout India, inspiring different cultures throughout time and the world, and signifies one of the first phases of globalisation.

The strength of the colour, its impact and the way that it has travelled all over the globe, highlights how the effort behind creating the special recipe for this dye was the beginning of a source of inspiration that continues to excite designers to this day. The Italian-born duo Simone Farresin (1980) and Andrea Trimarchi (1983) the designers behind Studio Formafantasma drew on their admiration and analysis of Diesen's study which now forms the fundamental ethos behind this exhibition. Both graduates of the Design Academy Eindhoven, their work has often explored the role of design in folk craft, the relationship between tradition and local culture, sustainability and the significance of objects as cultural conduits. And in working together with German colourist David Seidlitz, they have developed a collection of striking silk fabrics that capture and showcase both Felix Driessen’s legacy and the importance of the Turkish red within a global perspective.

The project stems from Formatasma identifying themselves as the actual links between craft, industry as they stimulate the user or admirer, engaging them in dialogue around the position, evolvement and objectives of design. Their passion in incorporating what they saw in the museum and the magic of Turkish red as explored in Driesen's study into their own work, demonstrates how creative ideas are sparked and how, once ignited, can be reinterpreted  in new design forms. The end products are the seventeen incredible scarves they have produced that are bold and modern and embody the highest quality of craftsmanship where their context further adds to the magic that they encapsulate.

The Turkish red collection is incredibly inspiring and makes you yearn to explore craft and creativity further so as to unearth the ideas and processes that inspire the work of designers today. Studio Formafantasma's Turkish red inspired scarves really highlight how great design and appreciation for creative practices will continue to touch hearts, travel and evolve. In a nutshell, this exhibition just makes you really happy and appreciative that so much inspiration and creativity continue to exist in this world.