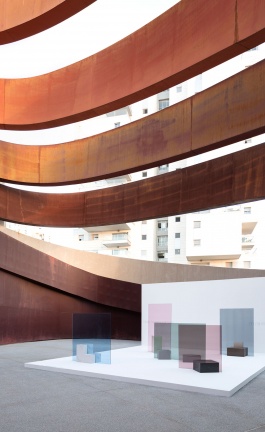 The Conceptual Storytelling of Nendo: The Space in Between 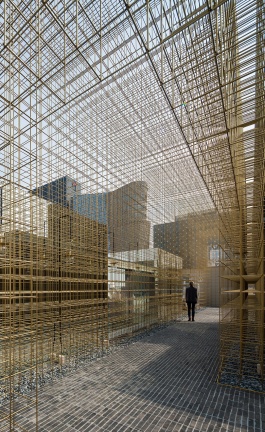 Perhaps one of the most famous artist couples of the 20th century, Christo and Jean-Claude have become synonymous with larger-than-life fabric installations that usually involve wrapping buildings, trees, even entire cliffs with cloth. They have notoriously hung a 400-meter piece of orange fabric across a canyon in Colorado (Valley Curtain, 1972) and wrapped famous buildings like the Pont Neuf in Paris (1985) and the German Reichstag (1995). Some of their more controversial projects include installing thousands of umbrellas in California and Japan simultaneously, and filling New York’s Central Park with 7503 decorative gates (the Gates, 2005), which received mixed reactions from New Yorkers. Although the artists have stated that there is no meaning or intention behind their work other than its aesthetic impact, Christo and Jean-Claude have undertaken some of the most ambitious projects in 20th-century art history, both in terms of scale and cost not to mention temporary; all of Christo and Jean-Claude’s large-scale projects no longer exist, and were often self-funded by the artists themselves through their selling concept drawings and collages from the preparation of each project. The only Christo and Jean-Claude large-scale work that will be permanent if completed is the planned 'Mastaba', a trapezoidal structure made of over 400,000 oil barrels to be built near Abu Dhabi.

The most recent Christo and Jean-Claude project to have been executed is an impressive installation of floating corridors covered with orange cloth in Lake Iseo, Italy. The pair’s first project to be completed after Jean-Claude passed away in 2009, “The Floating Piers” was conceived in the 1970’s and comprises a total of 5.5 kilometres of walkways, 3 km of which float on the water by means of specially-designed polyethylene cubes. The result is an undulating stretch of walkable platforms connecting the coastal village of Sulzano with the island of Monte Isola and the tiny islet of San Paolo, providing visitors with the opportunity to walk through the villages and across the water uninterruptedly. Unlike most other works by Christo and Jean-Claude, where the flowing and drooping shapes of the fabric conceal and alter the solid forms of architecture and nature, The Floating Piers are linear and strictly geometric in form, almost as if they’re imposing a rigid, mathematical principle on the water and the Alpine landscape. The installation is open to everyone free of charge 24 hours a day (weather permitting), and will be dismantled after July 3rd. According to the project website, all materials used for the work will be industrially recycled.

One by one, workers install the 100 by 16 meter sections to connect the islands of San Paolo and Monte Isola with the city of Sulzano.

Aerial view of the project’s building yard on the Montecolino peninsula (left) and the parking area for the thirty 100 by 16 meter sections on Lake Iseo (left), February 2016. Photo by Wolfgang Volz.

The outer cubes are filled with water so the piers slope into the lake along the sides.