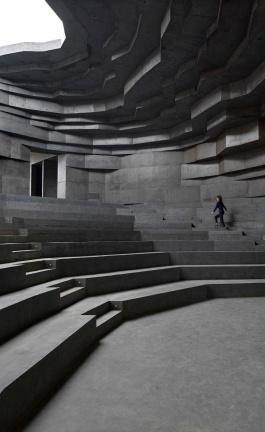 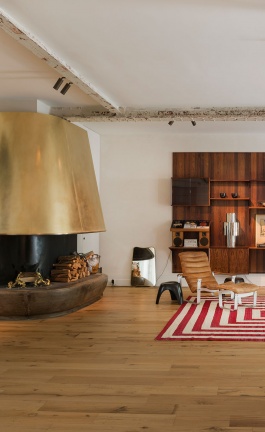 French multidisciplinary artist and designer Louis Barthélemy is passionate about African and Middle Eastern traditional crafts. Working with local artisans across the region in a variety of mediums, Marrakech, Cairo and Paris-based Barthélemy creates contemporary artworks and artefacts based on centuries-old techniques, driven by his commitment to conserving and supporting vernacular handicrafts threatened by globalization. His latest series of appliquéd tapestries, “The Wrestlers”, evocatively encapsulates the anthropological-informed approach of his practice as well as reflects the diverse influences behind his work and his creative take on the region’s cultural heritage.

Depicting Senegalese wrestlers that Barthélemy came across in Dakar, the quilt-like tapestries were handcrafted in Cairo in collaboration with Egyptian “khayamiya” artisans, using “bazin”, a type of cotton brocade popular in West Africa. Vibrantly colourful, the series’ exuberant iconography also pays homage to the appliquéd textiles of the kingdom of Danhomè, a pre-colonial West African kingdom located within present-day Benin. The Wrestlers’ multicultural underpinnings are evocatively highlighted at the Théodore Monod Museum of African Art in Dakar where the series is currently being exhibited until January 20, alongside the museum’s collection of tapestries, costumes, and other traditional artefacts.

From salt-glazed ceramics and limestone sculptures developed with local artisans in Siwa, a remote oasis located in the Western Egyptian Sahara, to hand-braided sandals made in Morocco, and hand-embroidered tapestries made in Beirut in partnership with a collective of women from Syria, Palestine, Iraq and Lebanon, Barthélemy’s work transverses geographical, cultural and artistic boundaries in line with the designer’s passion for travel. Following stints designing textiles for brands such as Gucci, Dior and Salvatore Ferragamo, the designer moved from Paris to Marrakesh before settling in Cairo where he discovered the art of “khayamiya”, a type of decorative appliqué technique historically used to decorate tents across the Middle East, which is now primarily practiced by only a handful of Egyptian artisans creating quilts and cushions out of small workshops at the Souk El-Khaymiya or “Street of Tentmakers”, a dusty alley within a 17th century market in the Egyptian capital.

Barthélemy’s interest in “khayamiya” has produced numerous projects, including “The Wrestlers”, which was inspired by his trip to Dakar in February 2020. More of a ritual performance than a sport, the mystical universe of wrestling is an integral part of the Senegalese culture with important fights lasting up to several hours accompanied by a female choir and a troupe of percussionists. Immersing himself in such performances as well as training sessions, Barthélemy was profoundly moved by the wrestlers’ aspirations and perseverance, and captivated by the coexistence of violence and gracefulness, triumph and defeat. “The heartbreak of the vanquished”, as he eloquently puts it, “the glory of the victors erected as gods on Earth and acclaimed by a bewitched audience make me wonder about the echo that this performance provokes in us”.

During his time in Dakar, Barthélemy also had a chance to admire the 18th and 19th century appliquéd hangings of the kingdom of Danhomè at the Théodore Monod Museum of African Art, which depict human figures engaged in fierce duels with formidable animals. Once in Cairo, he channelled his vivid memories of the Senegalese wrestlers and the colourful iconography of the Danhomè tapestries into the design of “The Wrestlers” series. Featuring vibrant splashes of contrasting colours, the tapestries embody, in the designer’s words, “the omnipresent duality between light and dark, life and death, mastery and abandonment” that underpin the wrestling fights. Intertwined lines break down both the wrestlers’ bodies and backdrop into colourful patches that imbue the tapestries with graphic exuberance while conveying the symbolic union between man and nature.

The key to the series’ vibrant colours and lustrous shine is the use of “bazin”, a waxed, hand-dyed woven fabric traditionally used for African clothing, which Barthélemy brought back from Dakar. Precisely cut into elaborate shapes, the bazin was painstakingly appliquéd and embroidered by hand on a thick cotton canvas in a Khayamiya workshop in Cairo. Fittingly, visitors at the Théodore Monod Museum of African Art have a chance to experience “The Wrestlers” in conjunction both with the Danhomè hangings and a series of Khayamiya tapestries ranging from 19th century Islamic motifs to the 1930s and 1940s Pharaonic inspired souvenirs, especially lent to the Museum for the exhibition. In this sense, the exhibition, although modest in scope, manages to set off a dialogue not only between contemporary art and Africa’s traditional crafts, but also between the continent’s diverse cultures.