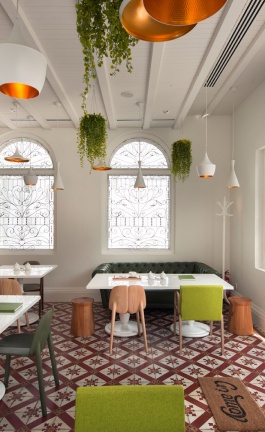 Modern Meets Tradition In A Whimsical Penang Abode In Malaysia

The Penthouse Of Christian And Karen Boros

We had to try it first... we couldn’t wait; the new Freunde von Freunden iPad Magazine is the new convenient way of enjoying our favorite ''Friends of Friends'' interiors. From its first day of operation Yatzer selected a tantalizing sample of what you’ll discover on FvF iPad, the Boros Residence. Access exclusive content, pack&go with individual story downloads for offline reading, available in portrait and landscape mode for vertical and horizontal viewing; with a built-in video player for seamless watching and an easy-to-use navigation; the FvF iPad Magazine updates itself automatically but best of all you can access it wherever you want even without an internet connection! Enjoy!

A work of art is the only phrase we could use to describe this bold, magnificent, and very masculine building in Berlin’s historical Mitte district. The home of art collector Christian Boros and his wife, Karen, pays homage to pure German modern architecture - where ornament is a crime and truth is given to materials; such a bare truth like the bare concrete. The building was originally used as a former war air raid shelter which was built in 1942 in the midst of World War II. The concrete structure still bears the wounds of the bullet holes which left their mark on the outer shell of this masculine building which was intendedly built to protect innocent civilians; the structure in its own tells a story – like the painted canvases of collector, ad agency founder and publisher, Christian Boros.

The Bunker, this historically significant Second World War building was originally constructed for the German railway company by reinforced concrete, and was used as a shelter to protect travelers who arrived at the Friedrichstrasse Railway station from air raid attacks. Architect Karl Bonatz was commissioned by Nazi Germany the architectural design of The Bunker; the building had a capacity which could shelter up to 3,000 passengers in five floors. Of the original unique characteristics of this historical building were the up to two meter thick walls, as well as the three meter thick concrete roof. The original interior spatial layout has an axially symmetrical layout; while the exterior façade on all four sides is identical – made of raw concrete and accentuated by fine details.

Moreover, all four facades of The Bunker feature double entrances which are connected to entwined double stairways which enabled as many passengers possible to enter the building simultaneously. Throughout the years, the building program changed from a shelter, to a prisoner of war camp, a textile warehouse, a techno club, and many more, so as to finally become the residence of art collector Christian and Karen Boros in 2003. The couple commissioned Berlin-based architect Jens Casper to drastically deconstruct the interiors of the 18 meter tall building and create a penthouse as well as an art exhibition space where the collector could display his art collection.

Upon entering The Bunker visitors first make their way down interlaced corridors of bare concrete, any additions made over the years, as well as walls were all removed leaving a clear shell as exhibition space. The façades of the building were cleaned and were structurally refurbished while paying homage and being in accordance with heritage. Bullet holes from World War II bear witness to the historical significance of the building and were dealt with respect, thus leaving war traces physically present. In the heart of this hermetic concrete cube remains the exhibition of contemporary works since the early 1990’s to recent. However, in order to create this space suitable for the Boros collection, architect Jens Casper drastically deconstructed the 3,000 square meter bunker, which was once devoid of natural light, transforming it into a complex 80-room arrangement. The artwork which is currently on display has been installed in the rooms by the artists themselves and works with the space.

A five-hundred square meter extension at roof level provides living space for the Boros family. To connect to the newly added glass structure, a piece of the three meter reinforced concrete roof was subtracted and the penthouse is now accessible by staircase and lift. The glass superstructure of penthouse acts as an opposing piece to the concrete cube’s massiveness, while allowing for views to the extending cityscape. However, despite the opposing glass structure spatial characteristics and materials of the original structure have been cleverly incorporated into the interiors of the glass superstructure addition. The penthouse is surrounded by terraces, a leafy garden and a pool that is used for bathing right in the heart of Berlin –this was of course easily accomplished as the thick bunker roof was three meters. The water in the pool provides as a means of reflecting sunlight into the living area and maximizing the amount of natural light. Moreover, movable metal screens along the perimeter of the pool give privacy to the outdoor living spaces.

The penthouse is laid out overall in an open plan with the communal living spaces flowing through the entire area.Lacustrine limestone slabs have used throughout the penthouse as the flooring creating a harmonious composition with the concrete surfaces. The interiors reflect the buildings structure and are vastly characterized by the reinforced concrete walls and the concrete ceiling. A gallant concrete fireplace suspended from the ceiling is undoubtedly the focal point in the living room. Glass ceiling openings provide for an abundance of natural light especially in the gallery area of the penthouse. While art acts as the transition throughout the living spaces. Unique midcentury modern furniture has been mixed and matched with unique antique pieces to provide for an eclectic interior design. But the artwork is what sets the tone in this residence – artworks by Damien Hirst, Eliabeth Payton, Ed Ruscha, Anselm Reyle, Olafur Elliasson, Franz Ackermann,Carl Andre, Enrico David, Olivia Berckemeyer, Wolfgang Tillmans and Terence Koh among others make this penthouse unique, both ARTchitecturally and design wise.

''The dream home and exhibition space that once seemed impossible to realize, has now become an art manifesto for Berlin’s historical Mitte district, where change is the norm.''