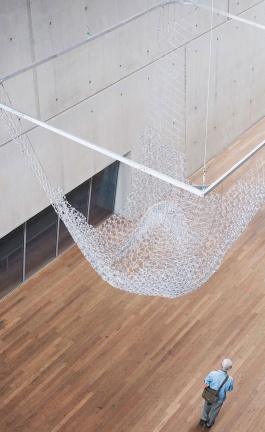 The 390-metre-long, Luchtsingel pedestrian footbridge in the city of Rotterdam was completed this summer, after a construction period spanning almost 3 years. Rotterdam-based architecture studio ZUS, Hofbogen BVCitizens and many other partners were involved in its construction which they consider to be “the world’s first crowd-funded public infrastructure.” With nine different entrances, Luchtsingel aims to rejuvenate Rotterdam through connecting neglected parts of the city like the old city centre with the livelier northern districts. The name Luchtsingel, which means ‘air canal’, not only reflects this purpose, but also emphasises the importance of canals for the Dutch city in a metaphorical way.

The bridge can also be considered as a public artwork criticising current market-oriented economy. According to its creators, it is Rotterdam’s responsibility to redevelop the abandoned areas, and as such the Luchtsingel is already raising a fair amount of attention in regard to the enhancement of these areas The multipurpose bridge is also linked to several public projects, like the harvestable roof-garden on top of the Schieblock, the new park with sports and picnicking facilities called Pompenburg and the recently refurbished Station Hofplein that hosts cultural events. Kristian Koreman, partner at ZUS, states that “the Luchtsingel, together with the transformed buildings and new public spaces, forms a new three-dimensional cityscape”.

People of the city contributed to the construction of the bridge, by donating money to bring the project to life with the motto of this new way of funding being: “the more you donate, the longer the bridge.” As a reward or ‘thank you’ for helping in the funding the project, all who donated now see their names written on the bridge. Described as a ‘permanent temporarily’ solution, Luchtsingel will last up to five years with a possible extension of another five years.